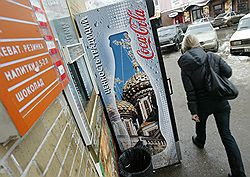 A group of Orthodox believers from Nizhniy Novgorod has accused the company Coca-Cola of spreading a blasphemous advertisement insulting the religious feelings of Christians. In particular, they mean the image of the local temples drawn inside the contour of a Coca-Cola bottle and intentionally turned upside down Orthodox crosses. The Orthodox group asks the local procuracy and the city governor to ban the commercial and punish the administration of Coca-Cola.

An action against Coca-Cola started at one of the websites on the Internet where two Nizhniy Novgorod citizens posted photos of refrigerators with the “insulting” advertisement labelled on them. The crosses intentionally turned upside down are the main object of the Orthodox activists` rage.

At the same time the representative office of Coca-Cola in Nizhniy Novgorod explains that by placing sights of architectural and art objects on the bottles the company demonstrates its position concerning the cultural heritage protection.