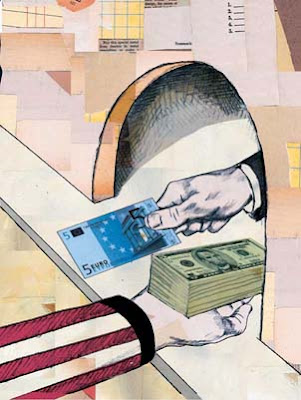 I was drinking my morning cup of wonderful coffee and thinking how the dollar is affecting Expats?

With the dollar now worth about 20 percent less in many cases against world currencies. The weak dollar and recent tax laws are hurting many of the millions or so Americans who live out of the USA, especially those paid in dollars! It is being felt by students, professionals and pensioners all over the world. The dollar is at a 26-year low against sterling and expected to stay above $2 to the pound for the next six months at least.

For those who work and live in Europe are often self-employed. The dollar’s plunge to all-time lows against the Euro has already caused changes in incomes and lifestyles. Example $15,000 transfers to around 10,200 Euro’s. So the dollar does not go as far anymore. When you earn money primarily in the States and then transfer it to Europe. The pain of the weak dollar is presented full force!

Adding to American Expat woes are laws passed last year which raised the amount some pay in U.S. taxes. Expatriate groups argue that the combination of the weak dollar and new tax laws will make Europe a less attractive destination for Americans wanting to work overseas. In fact it is making destinations all over the world less attractive.

This all makes for unhappy Americans who play around the world cheaply! Now they have to eat at McDonald’s, like I do. :))