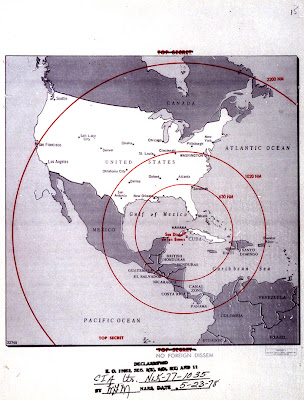 I have been writing about the missile issue since the beginning. This issue is a lot bigger problem than the world knows. Russia does not want missiles put near Her boarders with out Her having some say so and control.

Funny thing: USA really had an issue at one time about Missiles in Cuba!

The United States has formally made new proposals to Russia aimed at easing tension over its missile-defense plans in Europe, the Foreign Ministry said Thursday.

Russia has denounced U.S. plans to deploy a radar station in the Czech Republic and interceptors in Poland as a threat to its security. It suggested building up a joint missile-defense system instead, but this idea has aroused little interest in Washington.

Washington promised to set out its latest proposals to Moscow in writing following talks between foreign and defense ministers last month.

“The American side has finally, and late at night, passed to Russia written proposals regarding anti-missile defense systems. We are studying them,” Foreign Ministry spokesman Andrei Krivtsov said.

He gave no details of the substance of the proposals.

So here we are again, The countries play their games while us little people just try to live! If we would all (countries) mind our own business the world would be a safer place.

Just some thoughts for a Friday!