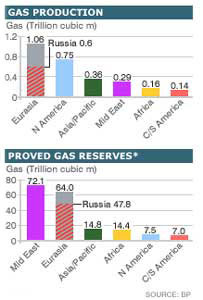 Before Dmitry Medvedev’s inauguration, Russia’s gas monopoly Gazprom had received a generous farewell gift from him. With no tender whatsoever, the monopoly obtained a third of gas fields of the federal reserve with the total resources of nearly 4 trillion cu meters. Gazprom’s wealth will step up by 13 percent as a result of that present.