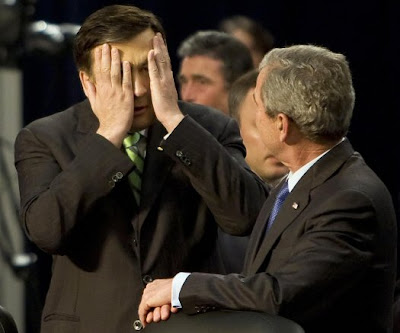 Saakashvili explains to Bush how not to see your people!
Hello,

Seems Georgia (Saakashvili) is a country (person) that seriously does not care for its people.

“Georgia severed diplomatic ties with Russia and toughened visa requirements for Russian citizens over the weekend in response to Moscow’s decision to recognize the independence of its separatist provinces of Abkhazia and South Ossetia.” (Link)

Now, understand that Georgia has broken diplomatic ties with Russia: They have left 2 Million people in Russia with no one to turn to for help. 2 Million people in Russia that have been left by their country. The people have no protection from any political issues that arise between governments. A Embassy and Consulate helps to promote trade and investment between Georgia and Russia. They also help in political, economic and other developments. The Consuls are also responsible for the consular protection of Georgian nationals who are temporary residents in, or visitors to, their consular district.

Now, also understand that a country that has only 4 and a half million people in it, really needs to preserve a relationship with the 2 million plus Georgians that have been secluded in Russia. That is close to half the population that remains in Georgia.

But then again, that makes sense because Georgia (Saakashvili) attacked (Who they claim to be) their own people in South Ossetia……………..