This is called building a future and a relationship… 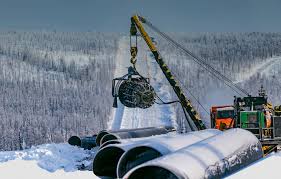 MOSCOW: Russia started pumping gas to China on Monday through the Power of Siberia gas pipeline, also known as the eastern route.

Russian President Vladimir Putin and his Chinese counterpart Xi Jinping took part in the launch ceremony via teleconferencing, the Kremlin said in a statement published on its official website.

Putin praised the event as “historic,” saying it will help take Russian-Chinese cooperation to a new level.

“This year is the 70th anniversary of the establishment of diplomatic relations [between Russia and China]. And this year we will start supplying Russian pipeline gas to China,” he said.

“This step brings Russian-Chinese strategic cooperation in the energy sector to a qualitatively new level, bringing us closer to solving the task set together with Chinese President XI Jinping of bringing bilateral trade to $200 billion by 2024.”

In turn, Xi said the pipeline launch marks a new stage in bilateral ties between the two countries.

This 400 Billion Dollar in sales project is the largest total project and revenue in Gazprom’s history; Gazprom has constructed a 2,200-kilometer (1,367-mile) gas pipeline named Power of Siberia. It will transport 38 billion cubic meters of gas to China annually….It was way ahead of schedule and has officially opened and Putin and XI were both there…

Way to go Russia and China…

The project, which Putin has called “the world’s biggest construction project,” is set to last 30 years and pump $400 billion (€363 billion) into Russia’s economy.

PS: This is what the USA is trying to stop Germany from doing. Wake up Europe, The US is not your friend…