Russia has Verified that North Korea just set off a Big Nuclear Bomb! 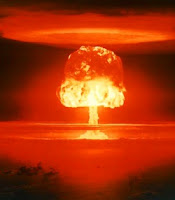 I was drinking my morning cup of coffee here in Moscow, Russia and the day exploded with North Korea being in the lead position. I thought to myself, “Tricky little devils aren’t they? Lets make a Major USA military holiday a target for turmoil!” No holiday for Obama!

Russia has just verified that North Korea has just exploded, 6 miles underground a – 20 kiloton nuclear warhead. Around a 20 kiloton warhead is what we so casually tossed on top of Hiroshima and Nagasaki (Japan) in 1945 to persuade them to see the folly of their ways.

So as the world is jumping up and down and calling for war, war, war and some more war, over this so called surprise issue. Lets not forget about the old saying: “If you see one cockroach you have hundreds in hiding!”

So this leaves North Korea in the Pakistan mode. We as a world can not chance triggering a smoking gun. North Korea has just put out to the airwaves that they will be conducting several more nuclear tests this year and they also tested several missiles today.

At least North Korea did not hide the fact that they tested a nuclear weapon. They told everyone about that fact. They are telling us that they will do more and that they are going to have nuclear deterrent for defensive capabilities.

If we act hasty in this situation we may not just erase North Korea but also South Korea and Japan.

Did You Know?
There are 9 nuclear countries, they are the US, Russia, France, China, Britain, India, Pakistan, Israel and North Korea.