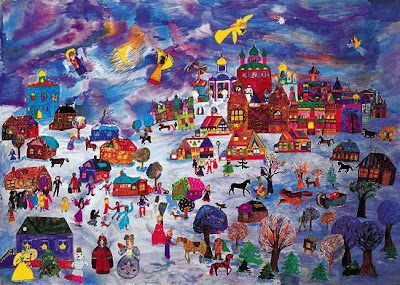 I was drinking my morning cup of coffee & thinking about how Christmas is not even half over in Russia!

I had my Christmas at the 25th of December but now the Russian version of Christmas is coming twice (?) on the 1st & 7th of January…… (click: read more for rest of article)

New Year Eve instead of Christmas

Few people in Russia remember, but when the communists took power in 1917 they banned the open expression of religion. While it was easy to pray at home, the Russian people were concerned about giving up their traditional Christmas celebration.

They re-invented the New Year’s holiday tradition to include a decorated tree, and introduced a character called “Grandfather Frost.” Known as “Ded Moroz,” Grandfather Frost looked very much like the western “Santa Claus” or “Pere Noel” – except he wore a blue suit.

Actually, Ded Moroz was a character that existed in the pagan culture, centuries earlier. For a time, Christmas was all but forgotten. In fact, it was generally celebrated only in small villages, where the citizenry was far from the prying eyes of the Party.

Today, Christmas is celebrated again, on January 7. But, to date, New Year’s remains the bigger event.

Thirteen days after Western Christmas, on January 7th, the Russian Orthodox Church celebrates its Christmas, in accordance with the old Julian calendar. It’s a day of both solemn ritual and joyous celebration

After the 1917 Revolution, Christmas was banned throughout Russia, along with other religious celebrations. It wasn’t until 75 years later, in 1992, that the holiday was openly observed. Today, it’s once again celebrated in grand fashion, with the faithful participating in an all-night Mass in incense-filled Cathedrals amidst the company of the painted icons of Saints.

Christmas is one of the most joyous traditions for the celebration of Eve comes from the Russian tradition. On the Eve of Christmas, it is traditional for all family members to gather to share a special meal. The various foods and customs surrounding this meal differed in Holy Russia from village to village and from family to family, but certain aspects remained the same.

An old Russian tradition, whose roots are in the Orthodox faith, is the Christmas Eve fast and meal. The fast, typically, lasts until after the evening worship service or until the first star appears. The dinner that follows is very much a celebration, although, meat is not permitted. Kutya (kutia), a type of porridge, is the primary dish. It is very symbolic with its ingredients being various grains for hope and honey and poppy seed for happiness and peace.

Once the first star has appeared in the sky, the festivities begin. Although all of the food served is strictly Lenten, it is served in an unusually festive and anticipatory manner and style. The Russians call this meal: “The Holy Supper.” The family gathers around the table to honor the coming Christ Child. A white table-cloth, symbolic of Christ’s swaddling clothes, covers the Table. Hay is brought forth as a reminder of the poverty of the Cave where Jesus was born. A tall white candle is place in the center of the Table, symbolic of Christ “the Light of the World.” A large round loaf of Lenten bread, “pagach,” symbolic of Christ the Bread of Life, is placed next to the Candle.

The meal begins with the Lord’s Prayer, led by the father of the family. A prayer of thanksgiving for all the blessings of the past year is said and then prayers for the good things in the coming year are offered. The head of the family greets those present with the traditional Christmas greeting: “Christ is Born!” The family members respond: “Glorify Him!” The Mother of the family blesses each person present with honey in the form of a cross on each forehead, saying: “In the Name of the Father and of the Son and of the Holy Spirit, may you have sweetness and many good things in life and in the new year.” Following this, everyone partakes of the bread, dipping it first in honey and then in chopped garlic. Honey is symbolic of the sweetness of life, and garlic of the bitterness. The “Holy Supper” is then eaten (see below for details). After dinner, no dishes are washed and the Christmas presents are opened. Then the family goes to Church, coming home between 2 and 3 am. On the Feast of the Nativity, neighbors and family members visit each other, going from house to house , eating, drinking and singing Christmas Carols all the day long.

So I get very confused; I ask my Wife when is Christmas? She tells me the 1st of January! Then she says but…. it is also the 7th of January! Just that the 7th is not as important.

I am not going to argue, I get lots of Winter Holiday fun & spend it with my Sweetie! I am a lucky man!