Russia: Is Chechnya Getting Safer? 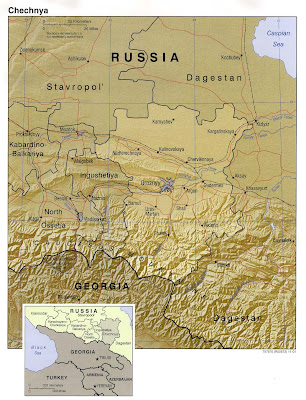 I was drinking my morning cup of delicious Russian coffee & thinking about Chechnya. I was thinking about doing an article on the troubled area. It has seemed to me that the conflict has mellowed out a lot down that way.

Just as I was getting ready to start the article I saw that Yuri Mamchur from “Russia Blog” decided to write the article first. So I am going to let you see his article and give him all the credit……
———————————————————-

Is There Still Terrorism in Chechnya?
Yuri Mamchur

Many positive political and economic developments are taking place in Moscow. Russia Blog has noticed that many of them have been ignored since the elections of the new Russian president. The doom-and-gloom scenario predicted by the Washington think-tanks did not take place, and the scholars along with journalists ran out of negative steam relatively fast.

The reporting about the troubled Caucasian region has disappeared from the Western media coverage as well. Grozny and Chechnya are in much better shape today than they were three years ago, with nearly half a million refugees returned to their home and nearly 100,000 private businesses started. However, terrorism remains to be an issue, and random minor attacks take place on a weekly basis. For detailed reporting and analysis of the attacks happening in the region, please visit the website of the “Russia-Eurasia Daily Watch”.
———————————————————-
Most of my Chechnya articles are in the “Windows To Russia: News!” blog.

Yuri is very correct about what he says in the article & I am glad he wrote it.