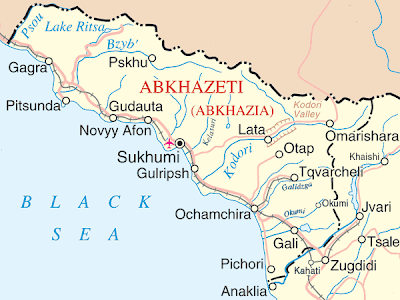 Here in the last few months Georgia has continued to provoke Abkhazia and her sea going rights. It has even got to the point that Georgia has confiscated sea going vessels that are going to port in Abkhazia. Tbilisi ordered that any ship sailing to Abkhazia without the permission of Georgian authorities should be arrested. Several ships from Turkey have already been seized it seems.

A few days ago Abkhazia put out an official statement that they will destroy Georgian military ships that tread on their waters. (I was not aware that Abkhazia had a navy of any type.)

So big bear has stepped in and backed little bears words up. Russia has said that a continuation of Georgian interceding in Abkhazian waters will lead to “serious armed incidents”.

The one thing that I have learned in Russia is that when the Kremlin makes a statement, it is not very long after that statement that action will result. Russia is in no way going to alter policy towards Abkhazia or South Ossetia and Georgia is going to have to get over it… (Whether you or I like it or not!)