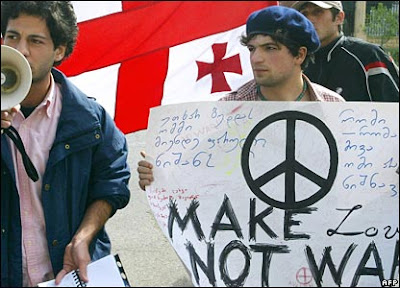 A war waiting to happen!

The Caucasus Republic of Georgia, as nations go, is not apparently a major global player. Yet Washington has invested huge sums and organized to put its own despot, Mikhail Saakashvili, in the presidency in order to close a nuclear North Atlantic Treaty Organization (NATO) iron ring around Russia.

US Secretary of State Condoleezza Rice visited the capital Tbilisi and made sharp statements against Moscow for supporting the separatist Georgian states of Abkhazia and South Ossetia, in essence blaming Moscow for an imminent war Washington has incited in order to bring Georgia into NATO by the December NATO summit.

Western media have either tended to ignore the growing tensions in the strategic Caucasus region or to suggest, as Rice does, that the entire conflict is being caused by Moscow’s support of the “breakaway” republics of Abkhazia and South Ossetia. In reality, a quite different chess game is being played in the region, one which has the potential to detonate a major escalation of tensions between Moscow and NATO.

The underlying issue is the fact that since the dissolution of the Warsaw Pact in 1991, one after the other former members as well as former states of the USSR have been coaxed and in many cases bribed with false promises by Washington into joining the counter organization, NATO.

Rather than initiate discussions after the 1991 dissolution of the Warsaw Pact about a systematic dissolution of NATO, Washington has systematically converted NATO into what can only be called the military vehicle of an American global imperial rule, linked by a network of military bases from Kosovo to Poland to Turkey to Iraq and Afghanistan.

In 1999, former Warsaw Pact members Hungary, Poland and the Czech Republic joined NATO. Bulgaria, Estonia, Latvia, Lithuania, Romania and Slovakia followed in March 2004. Now Washington is putting immense pressure on the European Union members of NATO, especially Germany and France, that they vote in December to admit Georgia and Ukraine.

The Georgia-Abkhazia military picture
The present escalation of tensions in the region began in May when Abkhazia said it had shot down two Georgian drones over its airspace. The announcement came two weeks after Georgia accused Russia of shooting down an unmanned drone over Abkhazia, which Tbilisi considers its sovereign territory. Moscow has denied involvement.

Russia has administered a peacekeeping contingent in Abkhazia and South Ossetia since bloody conflicts in the 1990s, and sent additional troops to Abkhazia recently to deter what it calls a planned Georgian military offensive. The two sides, Georgia and Abkhazia, have been in a state of suspended conflict since 1993, when Abkhaz separatists, backed by Russian forces, succeeded in driving the Georgians out of the province.

Tbilisi claims sovereignty over Abkhazia and South Ossetia and refers to both as “breakaway republics”. In 2001, Georgian troops joined with anti-Moscow mujahideen-trained Chechyn soldiers from neighboring Russian Muslim province of Chechnya to mount a military attack, unsuccessfully, against Abkhazia.

In an analysis of what a possible military clash, short of nuclear war between Russia and NATO might look like, the Russian government’s RIA Novosti military commentator, Ilya Kramnik, laid out the array of forces on both sides. In late 2007, the Georgian armed forces had about 33,000 officers and men, including a 22,000-strong army that comprised five brigades and eight detached battalions. These units had over 200 tanks, including 40 T-55 and 165 T-72 main battle tanks that are currently being overhauled.

Kramnik says that the Georgian military faces a 10,000-strong Abkhazian Self Defense Force with 60 tanks, including 40 T-72s, and 85 artillery pieces and mortars, including several dozen with a 122-152mm caliber and 116 armored vehicles of different types, numerous anti-tank weapons ranging from RPG-7 rocket launchers to Konkurs-M anti-tank guided missiles (ATGMs). The Abkhazian navy has over 20 motor boats armed with machine-guns and small-caliber cannons.

But most decisive, as was shown in the experience of the 1992-1993 Georgian-Abkhazian conflict, even small units can resist superior enemy forces in mountainous areas for a long time. Consequently, the outcome of any hypothetical conflict would depend on the aggressors’ level of military training and the influence of third parties, primarily Russian units from the Collective Commonwealth of Independent States Peacekeeping Force. Georgia’s armed forces are notoriously corrupt and poorly trained.

Although the United States has trained several crack Georgian units in the past few years, the fighting effectiveness of all other elements is uncertain. There are no trained sergeants, and troop morale is running low. Only about 50% of the military equipment is operational, and coordinated operations in adverse conditions are impossible.

The Abkhazian armed forces pack a more devastating punch because they would resist an aggressor that has already tried to deprive the republic of its independence. And Abkhazian units are commanded by officers trained at Russian military schools. Many of them fought in the early 1990s. Most analysts agree that the combat-ready Abkhazian army does not suffer from corruption. Moscow has recently beefed up the local peace-keeping contingent. Neighboring Caucasus states including North Ossetia side with Abkhazia and are ready to take on Georgia.

Moscow’s possible strategy
Moscow has stepped up ties with the two small republics against the backdrop of Georgia’s NATO bid and Western recognition of Kosovo’s independence from Serbia. Russia, however, has not formally recognized Abkhazia or South Ossetia.

Moscow has long backed Abkhazia’s de facto independence however. It has granted Russian citizenship to many of its residents and recently legalized economic ties with the separatist republic. For Russia, the conflict provides a source of leverage on both Abkhazia and Georgia. The more Georgia seeks to distance itself from Russia, the more Russia throws its weight behind Abkhazia.

However, Georgia under Washington’s man, strongman President Mikhail Saakashvili – a pretty ruthless dictator as he recently showed against domestic opposition – refuses to back off its provocative NATO bid.

Georgia is also a strategic transit country for the Anglo-American Caspian oil pipeline from Baku in Azerbaijan through Georgia to the Turkish port of Ceyhan. As well, the Baku-Tbilisi-Erzurum gas pipeline has been key to Azerbaijan as an alternative to the control of the Russian state monopoly Transneft in order to convey its oil and gas resources toward the West. The entire Caucasus is part of what can be described as a new Great Game for control of Eurasia between Washington and Russia.

As the Moscow Times sees it, “One way to disrupt Georgia’s NATO aspirations would be to heat up the conflict in Abkhazia to a level that would make it unacceptable for the Western alliance, which acts by the consensus of all members, to offer membership. Georgia’s leadership could be escalating tensions in hope of prompting Abkhazia and Russia to make a move that would leave the West with no chance but to intervene.

“Regardless of the motivation, whoever is stoking the conflict must realize that they are playing with fire. This brinkmanship can lead to a full-fledged war. Georgia would probably lose a war if Russia backed Abkhazia, while Russia would lose its hope of becoming a benign global player and would risk seriously straining its ties with the European Union and the United States.”

The effect of her comments, blaming Moscow for the escalating tensions, is to signal US support for the Georgia side in their efforts to force Russian troops from South Ossetia and Abkhazia.

In May, Abkhaz President Sergei Bagapsh said he was willing to conclude a military treaty with Moscow similar to that between the US and Taiwan. “Abkhazia will propose to Russia the signing of a military treaty that would guarantee security to our republic,” Bagapsh stated. “We are also prepared to host Russian military bases on our territory within the framework of this treaty. I would like to emphasize that this would not go against the precedents already existing in international practice. For instance, this treaty could be analogous to the treaty between the US and Taiwan.”

Just as Moscow refuses to recognize the sovereignty of Kosovo, so Washington refuses to admit the sovereignty of Abkhazia. In May, a senior US State Department delegation was in Abkhazia, meeting with local non-governmental organizations (NGOs)there as well as the president. In the past, from Serbia to Georgia to Ukraine, Washington intelligence agencies have used NGOs, including the George Soros-financed Open Society foundations, the US Congress-financed National Endowment for Democracy, the Central Intelligence Agency-linked Freedom House and Gene Sharp’s misleadingly-named Albert Einstein Institution to steer a wave of regime changes which became known as “color revolutions”.

In each case, the new regime was pro-Washington and anti-Moscow, as in the case of Saakashvili in Georgia and Viktor Yushchenko in Ukraine. Both countries began seeking NATO entry after the success of the US-financed color revolutions.

In all this, Washington is definitely playing with potential nuclear fire by escalating pressure to push Georgia and Ukraine into NATO. Czech Foreign Minister Karl Schwarzenberg on July 8 signed an agreement allowing US deployment of special radar facilities on Czech soil as part of the top-secret US “missile defense” it alleges is aimed at rogue missile threats from Iran.

As even former US secretary of state Henry Kissinger recently pointed out, the Bush administration’s categorical refusal to pursue the 2007 counter-offer of then-president Vladimir Putin to station US radar at the Russian-leased reconnaissance facility in Azerbaijan instead, was a provocative mistake.

It makes abundantly clear that Washington is aiming its military strategy at the dismantling of Russia as a potential adversary. That is a recipe for a possible nuclear war by miscalculation. Rice’s latest Caucasus and Czech visit only added to that growing danger.

F William Engdahl is author of the book A Century of War: Anglo-American Oil Politics and the New World Order and is finishing a book, provisionally titled, The New Cold War: Behind the US Drive for Full Spectrum Dominance. He may be reached via his website, www.engdahl.oilgeopolitics.net
———————————————————
This is a very, very, very true article.