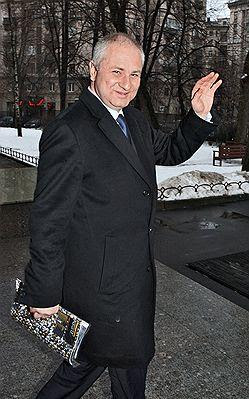 This is a good one and believe me there is much more to this story than what is being told. But nothing changes the facts that a man was shot and dumped near a hospital to die.

The owner of the embattled opposition web site Ingushetiya.ru was killed Sunday after being detained by police, and his supporters promised massive protests that could lead to a sharp escalation in violence in the restive region.

Magomed Yevloyev, a prominent opposition member and staunch critic of Ingush President Murat Zyazikov, was detained in Ingushetia’s main city of Nazran as he stepped off a plane from Moscow, his lawyer and friend Kaloi Akhilgov said by telephone.

He said Yevloyev had flown in business class with Zyazikov, a retired general from the Federal Security Service, and suggested that the two might have quarreled during the flight.

Ingush police said they had wanted to question Yevloyev in connection with an investigation into an explosion in Nazran earlier this year, Interfax reported.

Once inside the police car, Yevloyev, a Moscow-based lawyer and former investigator in the Ingush Prosecutor’s Office, attempted to wrestle an assault rifle away from one of the officers and was accidentally shot in the head during the scuffle, the police said.

Ingush opposition activist Magomed Khazbiyev said Yevloyev was found lying near a Nazran hospital with a bullet in his temple, Interfax reported. (Link)

What I do believe with out a doubt, is that it was a very badly planned issuance. That two wrongs do not make a right. I believe that a big mistake was made, even if it was someone that was considered very wrong in his way and manners of getting his point across.

His past and the way he proceeded to express himself got him in hot water and now he will be 6 foot under. Earlier in August, the Moscow City Court upheld a lower court’s decision in June to close Ingushetiya.ru on charges of carrying extremist content. Prosecutors have also accused the web site of inciting ethnic hatred.

There is a song by Kenny Rogers, The Gambler:

You got to know when to hold ’em, know when to fold ’em,
Know when to walk away and know when to run.
You never count your money when you’re sittin’ at the table.
There’ll be time enough for countin’ when the dealin’s done.

now Ev’ry gambler knows that the secret to survivin’
Is knowin’ what to throw away and knowing what to keep.
‘Cause ev’ry hand’s a winner and ev’ry hand’s a loser,
And the best that you can hope for is to die in your sleep.”

It did not help that his last hand he played in life, was on the jet that they detained him from. He got into an argument with Ingush President Murat Zyazikov, a retired general from the Federal Security Service. (opps)

What I believe is that he was not killed by accident and no one in their right mind would believe that, even me…..