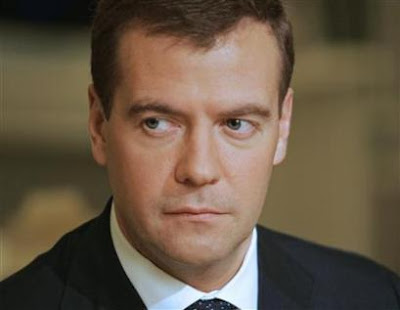 Try this interview from Medvedev: It is great!

President Medvedev revealed in a frank and close to public discussion with the members of the Valdai Discussion club how news of war in South Ossetia came to him, why Russia will not deal with the Georgian president, what George W. Bush said in his latest phone call, and why he won’t see Russia turn into a state behind an iron curtain.

“I was on vacation. They say, Russia was preparing for war – that’s a lie! The Defence Minister called me at 1 a.m. and said, the Georgians have told the Ossetians that they were starting a war. And while all those troops were moving

towards South Ossetia, I took no decision and hoped those dimwits would have enough brains to stop. They didn’t! We held ourselves until they started firing rockets, shelling residential blocks, and shooting at peacekeepers. Even then we didn’t respond.”

“I’ll never forget that night. It was very hard to order the use of force, while knowing the consequences. We did everything right. And I’m proud of it. Our response was symmetrical and proportional.”

“For me the events in August put an end to any illusion that the world is just. For me personally it was the loss of my last illusions. For Russia, August 8 is like 9/11 for America.”

“The war took the whole last month of my life, and there were more productive ways to spend it. We didn’t want it, didn’t want it at all! For 17 years we’ve being mending what had broken apart a long time ago. And they didn’t thank us for that – rather they started shooting at us.”

“Russia was not expected to react like that. Georgia got the idea: do whatever you want, Russians won’t meddle. That’s a diplomatic mistake that belongs to textbooks for diplomats. It’s a mistake – and for Georgia it’s also a crime.”

George Bush would do the same

“When I talked to Bush on the phone last time I told him: you’d have done the same in a situation like this, just in a more harsh way. He didn’t argue.”

“Bush asked me: ‘Why do you need it? You’re a young president with liberal background!’ I don’t need it at all. But there are situations where image is nothing and real actions are everything.”

‘I don’t want to live behind an iron curtain’

“We discussed the rearmament of the Russian armed forces yesterday. We’ll have to change some priorities, but all the rest remains the same. We don’t need a closed, militarised country behind an iron curtain. I don’t want to live in a country like that. I used to. It was boring and dull.”

“They should have invited Russia into NATO a long time ago. Were they afraid? Now we’d certainly have fewer problems. That was a serious mistake. And the second mistake is that any country prepared to get rude with Russia gets the right to be in NATO.”

“If Georgia had a NATO membership action plan by August 8, I would have done the same without a second thought. And what would the consequences have been? They would have been way more complicated.”

“I don’t think the confrontation phase would last long. We don’t want to create new alliances to tease Europe and America. Foreign policy should be pragmatic. The concept that the U.S. State Department embraced is pure ideology. We all need to take effort and drive ideology away from foreign policy. The current U.S. administration’s problem is that they have too many sovietologists and to few experts on Russia.”

“I’m not an advocate of creating alliances to spite anyone. There’s no sense in creating new alliances. If you think that Russia has decided to change its vector of development, that’s not true. At least as long as I’m the head of state. There’s no cold war now.”

Saakashvili is a drug abuser

“The Georgian head of state is not just a man we won’t do business with. He’s an unpredictable pathological and mentally unstable drug abuser. Western journalists know it! A two-hour-long interview on the high – that’s over the edge for a head of state. Does NATO need such a leader?” (Link)