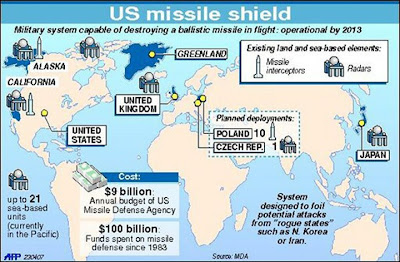 The issue of Missile Interceptors is going to blow up in America’s face! Russia has a lot more firepower behind the scene then the USA lets out into their reports about Russia……

“”After the G8 meeting, Dmitry Medvedev expressed his disappointment that the USA hasn’t listened to Moscow which claimed that the elements of the American AMD located closely to the Russian border reduce drastically the country’s security. “We won’t get hysterical about the matter, rather, we’ll think over relevant steps,” the President stated.(L)

Russia harbors no doubts about its ability to secure the country in the context of deploying components of the U.S. missile defense shield in Europe, “At all events, don’t be anxious, our security will be safeguarded. We will be certainly enhancing the security of our state no matter how the situation will develop,” Russia’s Deputy Foreign Minister Sergei Kislyak told reporters Thursday. (L)

In the mean time, the perspective is: Washington may station in Poland short/mid-range ballistic missiles under the guise of interceptors, said Alexander Pikaev, head of the disarmament and conflict settlement department at Russia’s Science Academy, RIA Novosti reported.

The United States intends to station ten interceptors in Poland and a radar station in the Czech Republic under the pretext of opposing potential threat of Iran. Russia is concerned about too close location of these facilities to its borders, fearing they would undermine the national security.

“Apart from the U.S. statements, there are no other ways to check whether these are the interceptors with non-nuclear weapons,” Pikaev said in the interview with RIA Novosti. “On the face of it, these missiles very much resemble the ballistic missiles of mid-/short range,” the expert pointed out.

“There is no complete guarantee that the matter at stake is exactly counter-missiles, not the ballistic missiles of ground-to-ground type,” Pikaev went on.

According to Pikaev, if the RF officers are denied the access to facilities of the U.S. missile defense shield in Europe, Russia won’t be able to check what missiles Poland has in the launching tubes.

“Therefore, the military will have to take into consideration the worst scenario, whereby ballistic missiles with very short time of arrival will be stationed there,” the expert said, adding that the implementation of the U.S. plans will make Russia’s combat and technical response inevitable.

“The missile defense system is the lawful target for nuclear forces. The Moscow system of air defense has been certainly added to the target list of American strategic forces,” he said.(L)“”

To all who listen to the games being played over Ballistic Missiles, do not believe but half of what you hear! No one tells the truth about Nuclear Missiles! (especially the USA)…….

Right now the United States is putting Europe in Hot water over these missiles. Russia will target any and all of Europe. I have said before Russia is stronger than the USA understands.

Why can’t we be friends?