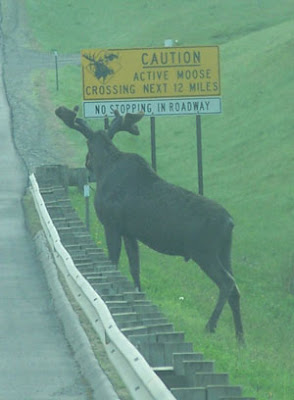 19/03/2008 19:56 MOSCOW, March 19 (RIA Novosti) – A wild moose that strayed into an industrial zone in the south of Moscow is currently being sought by environmentalists and police, a police spokesman said on Wednesday.

The moose was initially discovered near a residential building on Varshavskoe Highway.

The animal disappeared into trees near a group of garages and is currently thought to be somewhere in the midst of an industrial zone surrounded by residential buildings, a RIA Novosti correspondent reported.

Police are planning to catch the moose with the help of environmental specialists and to return it to its native habitat. Moscow Zoo employees are also at the scene.

Although Russia has the world’s second largest moose population, with approximately 500,000 animals, moose are rarely seen in big cities as they inhabit forests and large parks, feeding on grass, plants, leaves and bark.