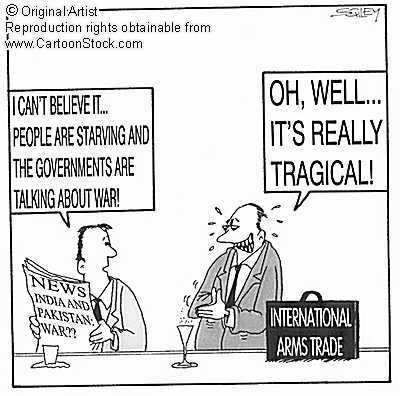 I was drinking my morning cup of coffee and thinking about the India / Pakistan development! What was a war of words, is escalating into a war of tanks and troops, that could lead to a war of Nukes!

The border between Pakistan and India now has a massive troop buildup on both sides. The verbal exchange since the terrorist acts in Mumbai, has reached almost a dead end. With accusations flying off the cuff from both sides, What is next “War?”

The Kremlin has been issuing statements through the Foreign Ministry. What has Russia worried is that “There are disturbing reports that New Delhi and Islamabad do not rule out the possibility of using force against each other. These are nuclear armed countries!”

The impression that Russia is getting from all her contacts is that at any second, anything could trigger war. Russia has been saying from the start sit down and communicate. Get everything out on the table. Russia also says that the only people who benefit from the two countries going head to head are International Terrorists.

Looks like to me that the world is bound to blow up something before the end of 2008. I guess that a financial crises and 100’s of millions of starving people in the world is not important enough to worry about. We have to start wars….

Something to think about.