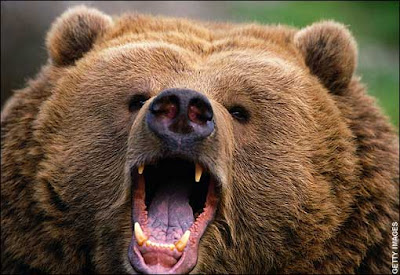 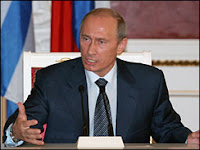 In an address to parliament, Mr Putin condemned Nato’s expansion and the US plan to include Poland and the Czech Republic in a missile defense shield.

“It is already clear that a new phase in the arms race is unfolding in the world,” Mr Putin said.

He said other countries were spending far more than Russia on new weapons.

But Russia would always respond to the challenges of a new arms race by developing more hi-tech weaponry, he said.”

Russia and the European Union are neighbors geographically. But geopolitically they live in different centuries. A 21st-century European Union, with its noble ambition to transcend power politics and build an order based on laws and institutions, confronts a Russia that behaves like a traditional 19th-century power. Both are shaped by their histories. The supranational, legalistic E.U. spirit is a response to the conflicts of the 20th century, when nationalism and power politics twice destroyed the continent. But Vladimir Putin’s Russia, as Ivan Krastev has noted, is driven in part by the perceived failure of “post-national politics” after the Soviet collapse. Europe’s nightmares are the 1930s; Russia’s nightmares are the 1990s. Europe sees the answer to its problems in transcending the nation-state and power. For Russians, the solution is in restoring them.

So what happens when a 21st-century entity faces the challenge of a 19th-century power? The contours of the conflict are already emerging — in diplomatic stand-offs over Kosovo, Ukraine, Georgia and Estonia; in conflicts over gas and oil pipelines; in nasty diplomatic exchanges between Russia and Britain; and in a return to Russian military exercises of a kind not seen since the Cold War.

Europeans are apprehensive, with good reason. They bet, massively, in the 1990s on the primacy of geoeconomics over geopolitics, a new era in which a huge and productive European economy would compete as an equal with the United States and China. They cut back on defense budgets, calculating that soft power was in and that hard power was out. They imagined that the world would come to replicate the European Union, and that when it did, the European Union would be a postmodern superpower.

For a while, it seemed to work. With Russia prostrate, the magnetic attraction of Europe, along with the promise of the American security guarantee, pulled just about every nation in the east into the Western orbit. The appeal of what Robert Cooper called Europe’s “voluntary empire” seemed without limit.

Today, however, European expansion has slowed and perhaps halted, and not just because Europeans balk at taking in Turkey. They also fear resurgent Russia. They realize that by enlarging eastward, Europe acquired a new Eastern problem. Or, rather, the old Eastern problem, the centuries-old contest between Russia and its near neighbors.

It wasn’t a problem when Russia was weak and poor and eager to integrate itself into the West. But Russia is back on its feet, rich and resentful, seeking not to join Europe but to take a special path back to great-power status. Putin laments the fall of the Soviet Union and seeks to regain predominant influence in the Baltic states and Eastern Europe, as well as over Ukraine, Georgia, Moldova and the rest of what Russians call their “near abroad.” But the former are now formally part of Europe, and the latter are what Europeans call their “new neighborhood.”

And so the nations of the European Union find themselves embroiled in a very 19th-century confrontation. After a decade of voluntary retreat, Russia now pushes back against Europe’s powerful attractive force, using traditional levers of power. It has imposed a total embargo on trade with Georgia. It has episodically denied oil supplies to Lithuania, Latvia and Belarus; cut off gas supplies to Ukraine and Moldova; and punished Estonia with a suspension of rail traffic and a cyber-attack on its government’s computer system in a dispute over a Soviet war memorial. It supports separatist movements in Georgia and keeps its own armed forces on Georgian territory and in Moldova. It has effectively pulled out of the Conventional Forces in Europe Treaty, freeing it to deploy forces wherever necessary on its western flank.

Polls show Europeans increasingly take a dim view of their large neighbor. French President Nicolas Sarkozy observed last year that “Russia is imposing its return on the world scene by playing its assets, notably oil and gas, with a certain brutality.” Even the Finnish defense minister worries that “military force” has once again become a “key element” in how Russia “conducts its international relations.”

But Europe may be institutionally and temperamentally ill-equipped to respond. Can it bring a knife to a knife fight?