April 8, 2010Comments: 0
Where is the president of Kyrgyzstan? Some are venturing to say that he is in the America military base?
If he is at the base, that could have been a bad move by America, because the opposition is well known for a dislike of the America military base and would like to see it removed. But since the Kyrgyzstan president is perceived as an American puppet at times that concept makes sense. Also the fact that the Western press has been trying to imply that Russia is the blame of all this, points to the fact that America might just be hiding President Kurmanbek Bakiyev…

Damage from Wednesday fighting was revealed early on Thursday in the Kyrgyz capital Bishkek after the opposition seized Kyrgyzstan’s government headquarters following clashes between protesters and security forces that killed at least 68 people. No police guarded the government headquarters, and hundreds of jubilant but calm residents stood outside, including some who had climbed up on an armoured personnel carrier. Others were walking freely through the building known as the White House. 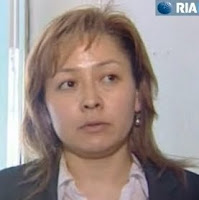 MOSCOW, April 8 (RIA Novosti) – Russian Prime Minister Vladimir Putin on Thursday spoke on the phone with Kyrgyz opposition-nominated premier Roza Otunbayeva, Putin’s spokesman said. Dmitry Peskov said Otunbayeva told Putin that her country needs economic assistance, and that Putin said Russia is ready to offer humanitarian aid. “It is important to note that the conversation was held with Otunbayeva in her capacity of the head of a national confidence government,” Peskov said.

This is a good video that shows what is going on and gives some much needed details about the situation.
I sense a Chess move here by Russia…
Windows to Russia!
➤