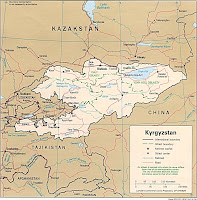 A state of emergency has been imposed in the capital and several regions of Kyrgyzstan amid violent clashes between police and anti-government demonstrators.

17 people have been killed and 142 wounded in Bishkek, reports KABAR news agency, citing the Kyrgyz Health Ministry, after police opened fire on crowds massing around the main government building.

According to some press, however, the number of people killed is actually 50? and injured 280+.

The president of the Kyrgyz republic has ordered a curfew be imposed.

The Kyrgyz Border Service has strengthened security along all borders of the country.