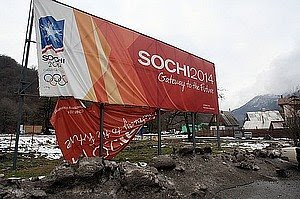 This is a Russian Disgrace, Putin needs to be following his Olympic issues very closely! We have been to this little area and drove through this wonderful little Old Village. It is very quaint, the scenery is beautiful from this village and the homes are not fancy. It looks like a old village that has lost its original shine. Just like many Russian villages.

Residents of Imeret lowland that had been chosen to construct facilities for Sochi 2014 Olympics clashed with bailiffs and police yesterday, July 22, 2008. Armed with sticks and bottles of incendiary mixture, 200 locals were defending their houses.

Accompanied by bailiffs, the land surveyors attempted past morning to enter a dwelling at Nizhni Imeret Street. The traffic police blocked the road and the bailiffs showed to hostess Svetlana Droficheva a writ of execution spelling out the ban on opposing their cadastral activities.

The news that authorities set eviction into motion spread amid the neighbors in no time. Some 200 barricaded themselves inside the house, the remaining stood on the defense in the street.

Chief of Adler authorities Evgeny Piven showed up at around 11:00 a.m. to confirm that the bailiffs really have the writ and the owners are to admit them to the house for cadastral work. “Over our dead bodies,” the locals rebuffed.

Meanwhile, the police and the bailiffs set to assaulting the gates. The locals didn’t retreat and police used pepper gas against them. A woman felt sick and an ambulance was called to help her, but the locals didn’t yield that time.

Officers of Russia’s riot police, OMON, were summoned to break down the resistance of people, whose houses are within the construction site of Sochi Olympics. Luckily the conflict didn’t escalate into a war. The tension was eased by police acting chief Yuri Starshikov. He approved of “my house is my castle” standing of residents and said they have ten days to appeal the writ. (Link)

One thing that is worth fighting for is your home. The statement “My home is my castle” is appropriate!

This bottom line is: The Olympics are not worth lives, sorrow, stress, destruction & taking homes. I hope the residents win!