Now this is really cool and we are going to get the information to go see this:

A 7000 sq. meter nuclear bunker in Moscow, Russia of the Alternate Command Center “Tagansky” was built to serve as a nuclear bomb shelter. When operating it had sufficient foodstuff stocks and air cleaning systems, so that those sheltered inside could survive for several months. This is a Russia – Soviet Era Bunker that has been recently opened to the public.

Now, we have an opportunity to take a tour of this declassified refuge. That is what I want to do. 🙂 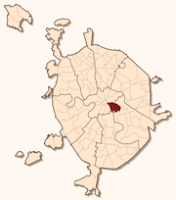 The Taganksky District is a district of Central Administrative Okrug of Moscow, Russia, located between the Moskva River and the Yauza River near the mouth of the latter. It takes its name from the former Taganskaya sloboda, where in the 16th century the copper-smiths lived. The modern center of this district is the Taganskaya Square, where the Taganka Theater is located.

It seems that we are always down in that area of Moscow so we might as well look it up and see how neat it is.

This is a private owned facility now and they say that the restoration was very authentic. It seems that about half the complex was not sold and was flooded by officials in Russia to make it unaccessible.

Hey Sweetie can we go to… 🙂