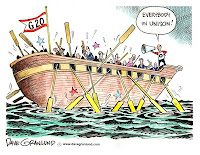 What is Medvedev up to this week?

1. Russian President Dmitry Medvedev has arrived in the United States to attend a number of key international events and hold talks with foreign leaders.

2. Medvedev will address on Wednesday the 64th session of the UN General Assembly with his vision of the current world order and the system of international relations.

4. On Thursday, the Russian President will attend a UN Security Council’s summit on nuclear disarmament, and hold talks with Algerian President Abdelaziz Bouteflika.

5. Later travel to Pittsburgh for a G20 summit to continue dialogue on steps to overcome the global economic crisis.

6. On the sidelines of the G20 summit he will hold bilateral talks with German Chancellor Angela Merkel and French President Nicholas Sarkozy.

That seems like a full plate to me… (Glad he likes his job!)