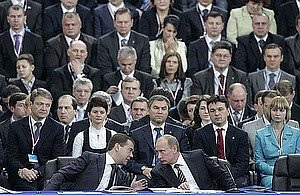 Russia’s financial reserves will prevent a spike in inflation and sharp fluctuations in the ruble, chairman of the United Russia Party and Prime Minister of Russia Vladimir Putin stated today at the party’s tenth congress. The financial crisis is turning into an economic crisis, he said. “It will test every country’s preparedness and their ability to protect their citizens, economies and currencies,” he predicted. “Russia is facing that challenge as well.”
Putin compared the crisis to a natural disaster. “It was impossible to stop, but we should foresee such a development of events and take measures in advance so that it passes painlessly,” he said, adding that it is still possible for Russia to avoid negative consequences from the crisis. He noted that Russia’s financial reserves allow it to ensure the stability of the budget syste, which mean stable payment of government workers, pensions and social benefits.

According to Rosstat, the state statistics service, the total debt for wages on November 1 had grown 33.4 percent since October 1 to 4.024 billion rubles. Wages are falling at the same time. Moscow city authorities say that wages have fallen 10 percent in the capital, and layoffs are beginning as well. Putin stated that unemployment benefits will be raised by 1500 rubles per month on January 1, 2009. That will be in addition to the raise in benefits calculated in the federal budget. Thus, the benefit payment will be 4900 rubles per month.
www.kommersant.com