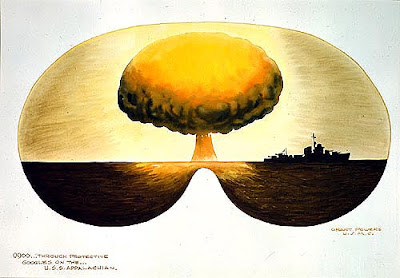 Hello, While this is an old post of mine it still has much meaning in the world. It is a shame that we as a human race can not just have peace, happiness and calm…

I was drinking my morning cup of coffee and reading about a subject that brought back memories of an era, I hope stays gone. Thirty years ago the USSR informed the world it had successfully tested one of the deadliest weapons ever invented – a neutron bomb. The day has gone down in arms race history.

A neutron bomb is an enhanced radiation weapon (ERW); the killing mechanism is an intense burst of high-energy neutrons.

So, the amount of energy used to create the blast wave and heat flash is much less, but the stream of neurons which destroys people and animals is many times stronger. At the same time, buildings and equipment are not affected at all.

I remember that In 1978 President Jimmy Carter halted neutron device production as concern grew over its effects on the arms race. I remember that it was another weapon that seemed to be used to scare us.

The Neutron Bomb was heavily propagandized in the USA and Russia. Both countries already had the means to destroy the world several times over with their nuclear arsenals. But the sound of a bomb that could destroy all life and leave the buildings intact made for many conversations in school and gatherings.

The image of walking the streets of a huge city devoid of life has been the basis for many sci fi books. This weapon just added to the imaginations of generations of youngsters from the USA and USSR!