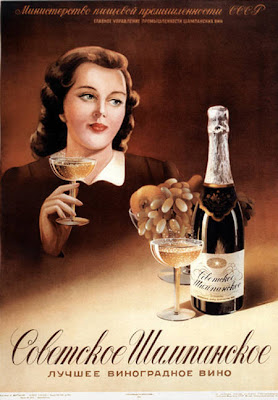 I was drinking my morning cup of coffee and watching a video that Svet put on the Russian Video Blog!

A fact that I had no idea about, was that the Soviet Union made their own Champagne! I always thought that only the French had Champagne *(Champagne is a sparkling wine produced by inducing the in-bottle secondary fermentation of the wine to effect carbonation. It is produced exclusively within the Champagne region of France, from which it takes its name.)

‘Soviet Champagne’ was born 72 years ago, when Stalin signed a decree ordering production of a sparkling wine called ‘Sovetskoye Shampanskoye’. The first wineries appeared in the southern city of Rostov and later in Gorky (now Nizhny Novgorod), in central Russia.

I have feeling that the French do not accept that the Soviets had Champagne any more than it is accepted that America makes a Champagne. But Russia has carried on the tradition in full force and no New Years in Russia would not be complete with out the local Champagne. (Sparkling Wine)

A little history on the Soviet Champagne: Chemist Anton Frolov-Bagreev is the man considered 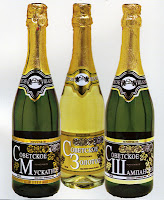 to be the founding father of ‘Soviet Champagne’ he devoted his entire life to perfecting his technology. It seems that he even perfected a way to allowed for fermentation of the champagne in reservoirs, rather than in bottles as before. This allowed for mass production, making champagne a drink for the masses. Frolov attained his dream of popularizing the drink after the Second World War. For several years in the Soviet Union, champagne was even sold on tap (spigot) in the food stores next to the fruit juices!

Russia has continued and will continue with Champagne production the Soviet way and every New Years multiple millions of bottles are sold of the world famous Soviet Champagne.

So next year try a Soviet Champagne at the New Year…