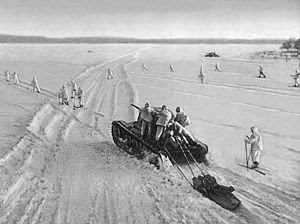 This Friday (today) marks the anniversary of the first defensive leg of the historic Battle of Moscow. In December 1941, the German army was stopped at the entrance to the Russian capital. (Link)

The Battle of Moscow a quote from Wikipedia, the free encyclopedia – “By early December, the lead German Panzer Groups stood less than 30 kilometers (19 mi) from the Kremlin, and Wehrmacht officers were able to see some of Moscow’s buildings with binoculars; but the Axis forces were unable to make further advances. On December 5, 1941, fresh Soviet Siberian troops, prepared for winter warfare, attacked the German forces in front of Moscow; by January 1942, the Soviets had driven the Wehrmacht back 100 to 250 km (60 to 150 mi), ending the immediate threat to Moscow and marking the closest that Axis forces ever got to capturing the Soviet capital.”

I can attest personally to the monuments erected to the defense of Moscow and when you travel Russia you will see thousands of monuments located in all towns, that tell the story of World War II and all the battles that occurred.

That is not very far, but in this particular case it was far enough…