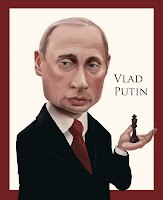 Wanna know what wakes up the Western press about Russia? Two things – 1. Russia is evil! or 2. Putin makes a statement of some type!

Lions and Tigers and Putin – (Oh – My) :
Putin hints at return to presidency: Washington Post
RUSSIA Russian Prime Minister Vladimir Putin on Thursday gave his strongest signal yet that he plans to return to Russia’s presidency, telling millions of TV viewers that he will consider running in 2012.

ABC, CNN, Washington Post, Drudge, Reuters and at least 100 other major players in the Western news press have run the same headline story about what Putin said. I even tracked it down to the local news stations and it was in many of the International and World news spots.

If the Swine Flu had spread as fast and complete as this story on Putin, then the world would have had a “crises” on its hands…