Here is what is going on…..
1. A video of the theme song for the Sochi Olympics.


2. Wallpapers for your computer desktop.. 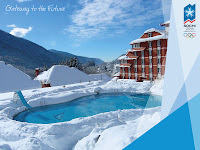 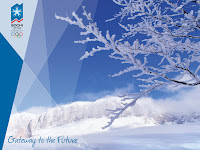 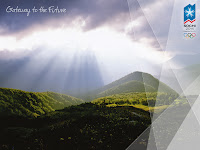 Welcome to Sochi 2014 – Our Gateway to the Future.

Set in a spectacular location, on the coast of the Black Sea and at the foot of the Caucasus Mountains in southern Russia, Sochi is vying for the opportunity to invite the world to a once-in-a-lifetime celebration of winter sport at the 2014 Olympic and Paralympic Winter Games.

The Sochi 2014 Winter Games will serve as a gateway to the future for Russia, opening unprecedented opportunities for the development of winter sport, reinvigorating the entire Sochi region and bringing to life the spirit of Olympian for millions of Russian citizens.

The historic legacy of the Sochi 2014 Games cannot be overstated. Coupled with the Russian Government’s program for the redevelopment of the region that is already under way, the Games will create a world-class resort destination where millions of winter sport enthusiasts from around the world will have the opportunity to enjoy brand-new, affordable facilities built for the sport of the 21st Century.

For the first time ever, Russian elite athletes will be able to hone their skills at a world-class alpine training and competition complex, taking winter sport in Russia to new heights.

Never before have the long-term plans for the development of a region aligned so perfectly with the long-term needs of the Olympic Movement.

Behind our vision for the Sochi 2014 Olympic Winter Games is the overwhelming support of the Russian nation and the Russian Government, which has given absolute guarantees to the IOC to deliver on every promise of Sochi 2014.

Sochi 2014 and the entire nation are committed to bringing the visionary and realistic plan for the 2014 Olympic Winter Games to life and delivering a once-in-a-lifetime Games to the Olympic Movement.

I am very excited about the Olympics in 2014. I have a chance to go and see it. When I was in the USA, I was only a few miles from Atlanta Georgia in 1996 Olympics. I could not go because my job (Director of Food Services at Rock Eagle 4-H) was to house and feed several thousand, Olympic Athletes and trainers that stayed at the complex.

I am not too busy this time. 🙂