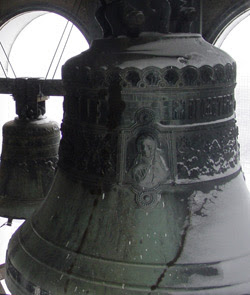 Russian church bells that have been ringing out at Harvard University for almost 80 years will soon return to their home at the Danilov monastery in Moscow. Harvard is hosting a bell festival to mark the return and have invited guests from Russia to take part.

The bells were taken from Russia in the 1930s by the wealthy U.S. philanthropist Charles Crane, who bought them in the Soviet Union at the time of the religious purges.

On Thursday the historic bells will ring in the U.S. for the last time at a graduation ceremony.

Later this summer they will be replaced by a new set made by a Russian foundry under an agreement between Harvard and the Russian Orthodox Church.

The first of 18 bells was replaced last year.

The bells, venerated by many Russians, will be feted upon their return to Moscow in September.

In danger of destruction by Stalinists, the Danilov Bells were purchased in 1929 and removed from the Soviet Union by American diplomat, philanthropist, and businessman Charles R. Crane, who donated them to Harvard in 1930. The tower of Lowell House, then under construction as a clock tower, was redesigned to receive the bells. All but one of the 18 originals have resided in Lowell House ever since; the last, placed in the tower of Baker Library at the Harvard Business School, returned to Russia last year.

Totaling some 25 tons, the Danilov Bells range in weight from 22 pounds to 26,700 pounds. The most massive, called the Mother Earth Bell, is nearly 9 feet in diameter and is rung from within by swinging an 800-pound clapper. Most of the bells were cast in the 19th century, but the oldest is believed to date to around 1690.

The larger bells are inscribed in Old Church Slavonic. The sides and shoulders of the bells bear icons of Christ, saints, and Mary, along with winged angels, medallions, and scrolls of floral decoration. The smaller bells are unadorned.