Americans take anger out on G20: 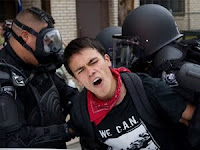 The first day of the G20 summit in Pittsburgh, USA has been marred by violent clashes. Police use pepper spray and rubber bullets to stop protesters from marching towards the venue of the summit.

The streets of Pittsburg have seen controlled chaos as hundreds of anti-globalization protesters rallied against the G20 leaders meeting. Violent clashes between demonstrators and riot police have led to the arrests of at least nineteen people.

The unwelcome streets of a city on lockdown: the financial summit brought out protesters in the hundreds, and police in full armor, blocking every entrance to the city center.

It was meant to be a peaceful event, but a tough economy is pushing people to the brink. Police surrounded the crowd, and used tear gas to quell the unrest.

With anarchy symbols leading the front of the line, few things could make it clearer that Americans are angry with the way things are going in their country, and they don’t think a global financial summit will work in their favor.

I like the little part about Medvedev’s speech to the University of Pittsburgh students. Medvedev said, “Love! What can be more important? Love towards people closest to you, those who are near. To my mind, it’s in line with any commandments – both moral and religious. It is the sense of life. Each of us understands the world differently, but it is probably the most important thing in life.!”

While Medvedev’s speech of love was going on – the freedoms of expressions outside in America, were being destroyed by America. (Somehow the love was lost!)