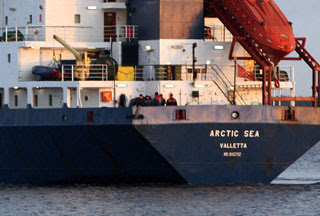 As you know I have been following the story (tale) on the Arctic Sea Freighter. This poor freighter has been accused of all sorts of bad things: From (WMD) Weapons of Mass Destruction to the largest shipment of illegal drugs on earth. It has been denied entry into the port it was to have gone to. It has been denied entry into any port. It has run out of food, fuel and water. It was recently being escorted for safety reasons by a Russian warship after no one else cared what happened to it.

Now it has disappeared again… (Along with the Russian Warship!)

“The cargo vessel and the warship disappeared from our radars, which cover an area with a radius of 25-30 nautical miles.” (Link)

Maybe this freighter should become a new weapon in someone’s Navy. It seems to have an uncanny ability to disappear! (This time a Russian Warship went with it…)