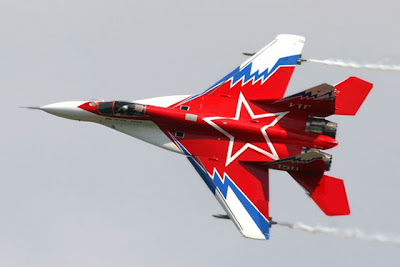 I think that this is a good example of what Russia is up to in the world scene! I doubt that press will give this much time on the air because it says good things about Russia and her MiG jets.
———————————————————————-
The upgraded MiGs have also been completely overhauled, enabling them to stay in service until the early 2030s. During this time they may undergo several more refits and may be provided with more advanced equipment to keep them in proper fighting condition.

The success of the Slovakian contract shows that Russia’s defense industry can stand its own against the West in its home field – aircraft for NATO’s air forces. And not only in aircraft – Greece’s purchase of Russian ships and air defense systems is another fine example. Hopefully, contracts, both filled and to be filled, are only a beginning, the beginning of the Russian defense industry’s comeback to the European market. (Link)
———————————————————————–
But I will give it time on the air because I think it is important. The NATO MiG is a crucial part of many air forces in the European Region.

Just something else that you may not have known about Russia…..