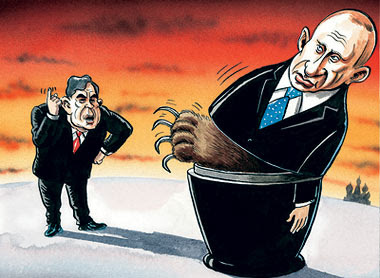 I was drinking my morning cup of coffee & studying an article about the visa issues in Russia!

What I do not understand is the desire of a country such as Russia to push away “freelancers, entrepreneurs and people who work at smaller companies.” Russia has also devastated one of its greatest resources,”English teachers, who often meet their students through agencies that never previously bothered to get them work visas.” This encompasses a lot of people.

What I see happening is that Russia wants only foreigners from Big Business, companies that can deal with the added overhead of the extra visa expense & time.

As my Wife said: “By this action, Russia has succeeded in only pushing out the intelligent foreigners. The ones who follow the rules, help the country and bring prosperity to Russia!”

My wife is very correct!

These should be happy times for Alessandro Balgera. After all, the 50-year-old Italian is getting married Wednesday.

But Balgera can only spend three weeks with his new Russian wife before he has to leave the country for 90 days, thanks to new visa rules that took effect in October.

Balgera is one of many foreigners scrambling to deal with the new, tougher rules on multiple-entry business visas that were introduced in a decree signed by Prime Minister Viktor Zubkov on Oct. 4.

Under the new rules, such visas permit stays of no more than 180 days out of one year and for no longer than 90 days at a time. Previously, many expats used multiple-entry business visas to live in Russia year-round, making an annual visa run outside the country whenever their old one expired.

For them, 2008 promises to be a year of paperwork hassles as they try to obtain work visas or residency — the two main ways they can legally remain in Russia year-round after their old visas expire.

The changes may go unnoticed by employees at big companies, which are usually well equipped to deal with the bureaucratic burdens of hiring foreigners. Many such companies got work visas for their employees even before the Zubkov decree.

But the new rules are proving to be a colossal headache for freelancers, entrepreneurs and people who work at smaller companies. Among the hardest-hit individuals are English teachers, who often meet their students through agencies that never previously bothered to get them work visas.

Anya Soroka, a Canadian citizen, does not know whether she will stay in Russia after March. It depends on whether her English-teaching agency will come through with a work visa.

“I’m not going to be devastated if I can’t come back to Russia,” said Soroka, an actress who supplements her income by teaching English lessons. “Obviously, I’d rather have a choice.”

Most of the English teachers interviewed for this report said they expected to stay in Russia in 2008 because their schools were promising to sponsor work visas for them. But the process is fraught with uncertainty, said Kira Hagen, an American who has taught English and worked as a nanny for well-off Russian families. Hagen said she was hoping to return to Russia as a dependent of her husband, if his company gets him a work visa. If not, they might leave the country.

“We could probably make an emergency move to Poland right now, if we needed to,” Hagen mused in her blog. “Or even Korea, if the ticket and housing were paid for.”

Legal experts stress that coming to Russia on any document other than a work visa and earning income — even as an independent contractor — is illegal.

But that law has never been seriously enforced, and Zubkov’s decree was an attempt to close the loophole, said Peter Reinhardt, a partner at Ernst & Young.

“The underlying presumption behind this rule change is that if someone is having to spend more than half their time here, then it can no longer conceivably be a business trip,” Reinhardt said.

Government officials say the rule changes were based on the principle of reciprocity. Russians face the same restrictions when traveling to Europe on multiple-entry visas, Alexander Aksyonov, director of the Federal Migration Service’s visa and registration department, said last month at an event organized by the American Chamber of Commerce. “If you take a look at the European Union countries, you will see that they have exactly the same system.”

Changes were introduced after a Russia-EU agreement to simplify visa procedures went into effect in June. In some respects, the agreement did make things easier, especially for short-term business travelers. For instance, companies that want to bring a foreigner to Russia can now issue their own invitations, whereas before they had to get the invitations through the Federal Migration Service. But some expatriates find it absurd that an agreement intended to simplify visa procedures has actually made their lives more complicated.

The EU “caused more harm than good to European businessmen” with the agreement, Jon Hellevig, a managing partner at the law firm Hellevig, Klein & Usov, said in a news bulletin last month.

The fallout from the agreement might damage the Russian economy by scaring away foreign investors and entrepreneurs, Hellevig said by telephone. “I think perhaps it would be better if Russia did not insist on full reciprocity.”

A EU diplomat said the visa agreement only covered short-terms visits and that Russia, not the EU, was responsible for imposing the 90-day limit. “Russia introduced the rule mainly on grounds of its policies toward foreigners living and working in the country,” said Taneli Lahti, head of the political section of the EU’s delegation to Russia.

Now, the two options that most foreigners have if they want to stay in Russia — a work visa or residency — both have their own difficulties.

Experts say it currently takes about three months to get a work visa. Most of that time is taken up by the process of getting a work permit, which a company needs to obtain before its employee can get the visa.

Not surprisingly, Russians applying for work permits in Europe face difficulties too. Unlike Russia, many EU countries require personal interviews at embassies for foreigners seeking work permits, and the rejection rate is higher, Hellevig said. The difference, he said, is navigating the Russian bureaucracy, which makes it more cumbersome to provide all the supporting documents needed for an application.

About 25 separate documents are needed, and “each one may have its own difficulties,” Hellevig said. Among those documents are medical certificates proving that the foreigner in question does not have tuberculosis or leprosy.

Those diseases are rare in Europe and North America — especially among wealthy businessmen — but that didn’t stop the head of the Federal Migration Service from defending the rule Wednesday. “The law sets out a list of diseases that foreigners must prove they do not have,” Konstantin Romodanovsky said at a news conference in response to a reporter’s question. “Explain to me, please, how can we give one list of required documents to citizens of Tajikistan and a different one to citizens of the EU? Surely, our laws must be objective.”

The other legal way to remain in Russia — obtaining residency — is a multiyear process that comes with a number of stringent requirements. For instance, after they achieve temporary residency — an intermediate stage on the road to becoming full-fledged residents — foreigners cannot leave Russia without first getting an exit visa. Also, foreigners with this status do not automatically get the right to work: They still have to apply for work permits.

Many EU countries offer a more liberal approach. In Britain, for example, foreigners qualify for residency if they have been in the country with work permits or business visas for five years. In Russia, expatriates who have been here for 10 years or more face the same obstacles to residency as anyone else.

Still, residency is the best option for people like Balgera, the Italian getting married to a Russian woman next week.

Balgera sounded frustrated as he described his plans to apply for a series of separate three-month visas until he could get temporary residency and live full-time with his future wife. What was especially galling to him was that he got his multiple-entry business visa on Oct. 19 — just days after the 90-day rule went into effect. “I had no idea whatsoever,” he said. “If I had gone two days earlier, I would have won six months. … But for one day, I lost everything.”

I was lucky, When we got my visa we beat the deadline. That will only last a year, then I have to have other plans in motion by that time.

My biggest complaint in all this: If Russia is playing games with the EU, why involve the USA in the new visa rules?

My Wife got a year tourist visa to the USA: Why then does Russia penalize the USA when the American visa rules are much different when traveling to America?