Russia: “We’re Glad Georgia Has Had to Withdraw Its Forces from Iraq” 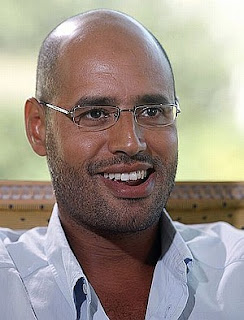 http://www.kommersant.com/page.asp?id=1011127
The son of the Libyan leader talks to Kommersant about events in Georgia
Libya supported Russia in the UN Security Council in the conflict with Georgia
Thanks to the assistance of Oleg Mitvol, former deputy director the federal agency Rosprirodnadzor, Kommersant was able to ask the eldest son of Libyan leader Col. Muammar al-Gaddafi Saif-al-Islam Gaddafi, who told Mikhail Zygar why the Arab world is behind Russia.
Why has Libya decided to support Russia in the situation with Libya?

First, Libya has always supported Russia; there are excellent relations between us. We consider Russia a great country. Our prime minister spoke to Vladimir Putin about that during his last visit to Moscow. But that is not the only reason. All Arabs are mad at Georgia because it sent its troops to Iraq and took part in the occupation of that Arab land. Therefore, now people in all the Arab countries are glad that Georgia has had to withdraw its forces from Iraq. We understand that it wouldn’t have happened without Russia. If it weren’t for Russia, Georgian forces would still be in Iraq.

What happened in Georgia is a good signal. It means that America is no longer the only country in the world that can make the rules of the game. Now, not only America, but Russia, is a great power. Now there is balance in the world. Russia is being reborn, and we value that. It is very good for us, for all of the Middle East.

We understand, of course, that Georgia started the war first. The Georgian simply thought that the Americans would stand up for them, come and help them, fight along with them. And that is a signal to all countries that rely on America alone, thinking that closeness to the United States will allow them to do anything they want. It’s not so.

In general, I should say that it’s very silly when the Georgian president complains about the Russian invasion. How can you talk about occupation, when you are occupiers yourself? The Georgians along with the Americans occupy Iraq! And now they are trying to portray themselves as fighters for freedom and democracy.

Is that the position only of the Libyan leadership, or have you discussed it with your partners in other Arab countries?

Well, it is Libya’s opinion, of course. But believe me, all Arabs are glad Georgia has withdrawn its troops from Iraq. We simply decided to come forward first because Libya is a member of the UN Security Council and our voice will have weight.

Does Libya plan to introduce a resolution on Georgia in the Security Council, or just to support Russian initiatives?

We will support a Russian resolution. Our ambassador will be briefed and will consult with the Russian representative in the UN Security Council.

Do you think that joint Russian and Libyan actions in the Security Council will be successful?

We will support Russia in any case. We understand that Georgia was the first aggressor. And Russian peacekeepers were forced to respond. Russia should have the right to defend its citizens.

Libya has exerted a lot of effort recently to restore relations with the U.S. and Europe. Aren’t you risking damaging those relations now with strong statements?

No. Not at all. We have good relations with the West and with Russia. But Libya chose Russia as its strategic partner. Of course, Russia is our strategic partner, and we cannot compare it with any other country for closeness. That’s obvious.

Relations between Russia and Libya became so close after Vladimir Putin’s last visit to Tripoli. All at once, huge contracts were concluded on Russian Railways and Gazprom work in Libya. What was the reason for such closeness?

Not at all. Libya’s affinity for Russia has a long past. Libya has great affinity and respect for the Russian people. That’s the truth. Our cooperation has gone on for 40 years. That is the whole reason, and nothing more.

Libya was a pariah state. Now many are calling for Russia’s isolation. Do you think it is a real threat for Russia?

No, I don’t think so. The whole world needs Russian gas, Russian oil. It is not expedient for Europe to let relations with Russia worsen. And then we, the Libyans, will do everything possible to work in Russia and invest in its economy. Because Russia is a great country.

Is the idea of creating a natural gas OPEC still realistic?

We discussed that idea with Russia and said that we are ready to join that club. But the support of the other gas producing countries is needed still.

In the last few days, the Middle Eastern press has been writing that five American and British aircraft carriers suddenly appeared in the Persian Gulf. Do you think the U.S. can strike at Iran in the present situation?

No, I don’t think that will happen. Because Iran is not Georgia. And prices for oil are very high and the consequences of such an attack would be very serious.

The last question concerns your personal future. There have been rumors recently that you may replace your father soon as leader of Libya. Can you confirm or deny that?

It is true that many are trying to find the answer to that question now, especially in Libya. But you will be the first I answer. I will have to say a lot about it soon, but I have decided to leave politics. Instead, I will devote all my attention to the development of civil society and business in Libya, philanthropy. I decided to take a few steps back.
Interview by Mikhail Zygar