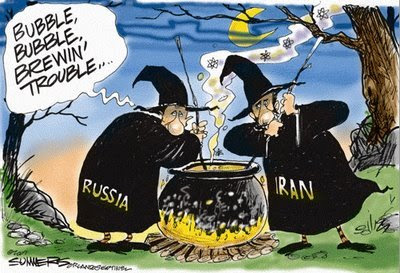 This is how the West looks at Russia and Iran!

I was drinking my morning cup of coffee and thought to myself: “We want to travel but it looks like trouble is in the air!”

Russia to Respond to U.S. Missile Defense Shield in Europe via Belarus

Russia will probably station Iskander missile systems and strategic bombers in Belarus in response to deployment of the U.S. missile defense shield in the Czech Republic and in Poland, Interfax reported with reference to the RF Ambassador to Belarus Alexander Surikov.

Iran is “root of all evil”: Israel PM contender Israeli cabinet minister Shaul Mofaz, a contender to succeed the prime minister, denounced his native Iran on Wednesday as “the root of all evil” and said its nuclear program constituted a threat to world peace.

Government forces in Kyrgyzstan have located an arsenal of American weapons in a house in the capital Bishkek. The discovery, at a residence occupied by US military forces, was made on Tuesday night, reports Russia’s RBK-Daily newspaper.

There are reports of gunfire in Georgia’s breakaway region of South Ossetia. Officials from the separatist republic say Georgian troops have been using sniper and machine-gun fire to target a key road and two South Ossetian villages.

It is necessary to create in the near term united regional systems of missile defense in the Caucasus and Middle Asia, Russia’s Air Force Commander-in-Chief General-Colonel Alexander Zelin announced August 5.

So between you and I: Looks like the Fall Season maybe an interesting time of the year in this part of the world. Should be a good time to travel, need to go see Israel and Iran, before a war there blows everything up. We are glad that we recently traveled to the Georgia area just before all the issues started in Abkhazia and got to see that beautiful country: before it gets blown up!

I wonder if the world could wait until we get to travel to all the places we want to before they blow each other up?