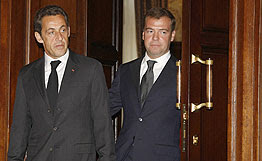 I have been waiting today to see the outcome of French President Nicolas Sarkozy, meeting with his counterpart Russian President Dmitry Medvedev. The meeting went as planned and Russia will pull out of Georgia. Now remember that they are pulling out of Georgia not Abkhazia or South Ossetia.

The French president said on Monday that Russia has promised to pull all troops out of Georgia, but not South Ossetia or Abkhazia!

Nicolas Sarkozy, speaking after talks with his counterpart Dmitry Medvedev near Moscow, also said that under the new agreement Russia has pledged to withdraw from observation posts located between the Georgian towns of Poti and Senaki within a week. (Link)

This was very expected on Russia’s part and no one should be surprised by the news. Russia has also announced that they will put embassy’s in both Abkhazia and South Ossetia. They are looking for buildings as you read this. There will also be 200 EU Observers stationed in Georgia near the conflict borders. These are to insure that Georgia does not start any trouble again.

He said Russian troops would pull out of the Black Sea port of Poti and nearby areas in the next seven days, but only if Georgia signed a pledge to not use force against Abkhazia and South Ossetia.

This is the same pledge that Russia has tried for years to get Georgia to sign and they refused. (You see why now.)

Strange how Russia has had to slap America and Europe in the face over Georgia. Russia went to the European Union, United Nations and NATO about Georgia way before all this happened. The USA blocked any and all problems brought up by Russia in every situation it could. That is why Medvedev and Putin say….

Georgia is actively working to restore its attacking potential, and is being aided by the U.S. He also accused Washington of complicity in Georgia’s ground and air offensive against South Ossetia, which claimed the lives of a large number of civilians.

Saakashvili “decided to solve an old, complex problem, with historical elements, in one movement, through the use of military force. In this, he received the blessing of one country,” Medvedev said.

I think that the USA is going to be not happy about this information….

Now you know a little more about what is happening in the world!