I was drinking my morning cup of delicious coffee here in Moscow, Russia. I was doing some thinking about a faded black older BMW car that I had seen the other day with a license plate with the number of the devil on it! It went by at a very high rate of speed, as Svet and I stood near the theater taking pictures of horses, in which that we had just seen a movie. I could not and can not understand why someone would put the sign of the devil on their license plate. (registration plate)

I remember shaking my head and mumbled something under my breath, because I thought to myself, that person has issues.

MOSCOW, May 7 (RIA Novosti) – A driver had to be cut out of his BMW after a tram rammed into his vehicle, which was displaying the number 666 on the registration plate, a police source said on Thursday.

The accident occurred near a church in east Moscow and the significance of the number 666 on the vehicle’s registration plate made some emergency workers nervous. (Link)

I checked some more news sources and I am 99% positive that this is the same car. The driver was young and had no respect for people, horses or other cars. He ran one actually two of the lights that was at the intersection as we waited for a bus. I remember him because I was trying to get pictures of people who were riding horses across this same intersections. I did not get the car on a picture but I got the horses. Not a very good picture but you can still see the horses and they were being ridden through Moscow, late at night. It was this intersection that he weaved around cars at a high rate of speed and tore into the night. I remember his plate and the number of the devil!

If it is not him then there is another BMW with number of the devil on its license plate running around Moscow, Russia. 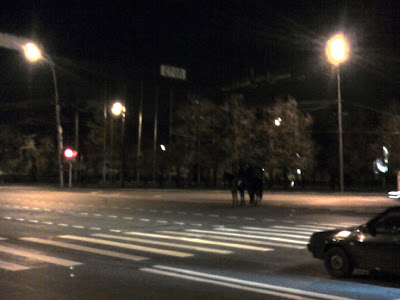 So now this guy is in serious condition and his car totaled. The people on the tram were not hurt according to reports. It seems that many people in Moscow like to drive on the tram tracks and block the trams all the time. Or try to out run them and get across the intersection before them.

Just like playing chicken with a train at a train crossing. The train wins sometimes…