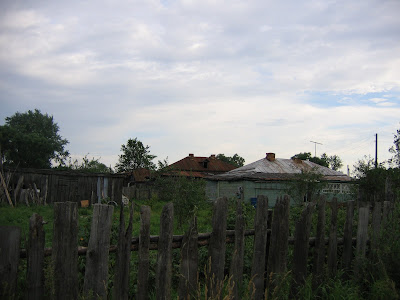 Still The Soul Of Russia: The Village!

The second cup of morning coffee brought forth this really good article on Mother Russia. (The Country!) It gives a positive perspective about Russia and the one area I disagree with is matter of personal outlook on the Russian people! (I give my difference at the end of the article.) I understand this attraction to Mother Russia. Being 1/2 German and 1/2 Britain my roots are deep in Europe…….
———————————————————–
The Attraction of Mother Russia

Special to The St. Petersburg Times

To the frequent surprise of Russians themselves, many westerners choose to live and work in Russia, some of them permanently. Some are inspired by Russian Orthodoxy, while others come in search of a beautiful Russian bride.

When Peter the Great started building St. Petersburg in 1703, his vision was of a new capital that would resemble a western city in both appearance and customs. With impressive energy and entrepreneurial skills, Peter I tried to bring the best European achievements to Russia, such as business knowledge, practicality, good organization and attention to education, arts and science.

But even today, few Russians identify their homeland as a completely European country. There are many historical, political and cultural reasons for this — not least that it needs more time to integrate the Russian economy into international business processes than the 16 years that have passed since the break-up of the Soviet Union.

Step by step however, Russia is becoming an increasingly open country. Foreigners come to live in Russia for various reasons, such as to do business, study or working in the diplomatic service. Naturally, they bring with them their own cultures, experiences and habits. Moscow and St. Petersburg, where most expatriates in Russia are based, now offer considerable resources for foreign communities, from newspapers to schools, art festivals to ethnic restaurants and much more. Successful westerners may also unintentionally enhance the very popular idea among Russians that life in the West is completely different and far easier than in Russia.

According to the Russian mentality — or rather the Soviet way of thinking that is still alive in most adult Russians — wealthy foreign countries seem to many Russians to be the best places in the world. In the words of Arjen Roodvoets, a Dutch citizen who teaches his native language to Russians at both St. Petersburg State University and the Netherlands Institute, “Russians often think that life in the West is much better than here, but it is often not true. There is also an understated self-appreciation in Russia. In my opinion, Russia is a really special and original country. Russians should just be who they are, be natural and maintain their native values, such as a strong education system and culture.”

Roodvoets, who has lived and worked in Russia for nine years, has become deeply involved in Russian society and has adapted to Russian life. “I like many things in Russia, enjoy the Russian language and dealing with local people. One of the best things is my job here, because I like communicating with Russians.” Roodvoets, who speaks fluent Russian, was baptized in Russia and his favorite place in St. Petersburg is Valaamskoe Podvorie church on Staropetergovski prospekt.

“I think it is Orthodoxy that distinguishes Russia from other European countries and has formed the national mentality,” he says.

The cultural exchange between Russians and ex-pats is a two-way process. It is generally accepted that many aspects of Russian life have been westernized in a positive way (primarily business and management), and it is also true that there are a number of foreigners who enjoy exploring the differences between their own lifestyle and life in Russia.

Cobus van Rooijen, Group Sales and Distribution Director for Heineken Russia, says, “In my free time I usually explore cultural and natural attractions — recently, for example, I went hunting near Lake Baikal in temperatures of -35 degrees Celsius, and also attended a magnificent performance of “The Nutcracker” directed by Alexei Ratmansky at the Mariinsky theater.”

Yury Mikhailov, Managing Partner at Consort Consulting Group, has considerable experience of interacting with westerners and says he even knows some ex-pats who have become more Russian than Russians themselves by studying its history, literature, politics and character traits.

Generally, however, Mikhailov believes that “Most foreigners stay the same by going to their ex-pat bars, restaurants, clubs and consular events. This of course does not allow them to integrate and become familiar with local life.”

As to the differences between Russians and westerners, in Mikhailov’s opinion, “Foreigners often seek to achieve more recognition in professional circles as well as in their personal relationships.”

Walter Ragonese, who is from the U.S. and works in Russia as the Security and Business Continuity managing director of InterComp, concurs. “Most of the ex-pats I know have very fulfilling professional and social lives in Russia. Work is generally the focus of the professional/social life balance, but family and friendships are usually very significant factors in making the experience well rounded and personally satisfying.”

Ragonese’s colleague, Daniel J. Hill, who is general manager of InterComp Outsourcing in Russia, explains, “After 14 years in Russia, I am still here because I still find it an exciting, vibrant and dynamic place in which to work and live. I think many westerners (myself included) try to find a balance between maintaining ties with their home culture and friends, and embracing all of the new and interesting aspects of developing Russian friends and experiencing Russian culture.”

Asked what inspires foreigners to come here, Ragonese says, “Moscow and St. Petersburg in particular are very cosmopolitan and attractive locations that rank alongside other cities around the world for expatriates looking to develop their careers.

“Russia has always been open to the employment of westerners who have the necessary skills required by an organization,” he adds. “This hasn’t changed from 16 years ago when I first arrived in Russia. Obviously the required skills have become more specific with every year as the Russian market for management talent has become more developed.”

A good investment climate and very good corporate career opportunities are among the most positive factors about working in Russia, according to Cobus van Rooijen, top sales manager of Heineken Russia. But he cited the common problem often complained about by foreigners — elements of bureaucracy. His words were echoed by Consort Consulting Group’s Mikhailov: “Of course there is a certain amount of legal issues and bureaucracy, and dealing with red tape has never been easy, but it is a much more achievable goal than it used to be.” He adds, “If you just think for a minute, it’s not that easy to settle and work in other parts of the world unless you are an EU citizen wanting to work in other EU countries.”

From Mikhailov’s diverse professional experiences, he knows that many westerners who have entrepreneurial skills and an aptitude for business say that Russia became the land of opportunity several years ago. On the issue of why Russia has become a popular country in which to work, he says, “Profitability rates and sales turnover growth are much higher here than in the west, and this is what attracts businessmen seeking a faster return on their initial investments.”

Svetlana Sokhatskaya, branch manager of Kelly Services St. Petersburg, suggests that “Foreigners, in most cases, know how to count money and they realize that taxes in Russia are much lower. Many companies provide top managers from other countries with free apartments while they are working in Russia and it is, no doubt, a great advantage for westerners.”

Now there is a general tendency among local firms to invite foreign managers in to make the business more efficient. “It just means,” continues Sokhatskaya, “that in comparison with Russian specialists, westerners possess more international experience in business and management.”

The most popular and attractive segments of the local market for foreign investment are construction, real estate, the automotive industry, IT, the hospitality industry, publishing, food and the sale of different kinds of equipment. According to Mikhailov, “The number of companies is increasing every year. Since we work closely with Finnish companies, we know that there are more than 400 Finnish firms on the local market”.

InterComp’s Ragonese considers that “The most popular spheres of employment for ex-pats are auditing services, taxation consulting, and law firms. Real estate consultancy and management also employ a significant number of expatriates.”

One of the most dynamic industry segments is IT — virtually all the major brands are in St. Petersburg now, including Alcatel-Lucent, EMC, Motorola, Nokia, Microsoft, Google, Sun Microsystems and Intel.

The latest International Technical Exhibition at Lenexpo illustrated the level of interest in the Russian market — there were more than 100 companies from India alone at the fair, which focused on metallurgy and mechanical engineering, illustrating the line of business cooperation that Indian companies are planning to take in the near future.

The profitable hospitality industry, specifically the restaurant business and tourism, also tend to attract foreign managers. A myriad of different cuisines are on offer in the Northern capital — not just the usual Italian and French restaurants, but also Greek, Indian, Thai, Mexican, Korean, and many more. However, the active international presence on this business scene in turn spurs on Russians to increase their activity on the market and attract ex-pats and tourists to visit different Russian restaurants and clubs.

The private and daily lives of ex-pats in Russia may not differ greatly in some respects from the experiences of ex-pats in other foreign countries. But every country has its customs and idiosyncrasies. Van Rooijen of Heineken Russia thinks that foreigners here have several dreams — to learn the Russian language, to understand local customs and traditions, and to enjoy support in their business initiatives.

“What westerners lack in Russia,” says Mikhailov of Consort Consulting Group, “is the greater sense of security and stability that they have become so attached to back home — that’s why from time to time they tend to take off and head home for a couple of months to recharge their batteries, touch base with their friends and relatives, and share their Russian experiences.”

InterComp’s Ragonese has a keen interest in outdoor activities, and therefore lives outside the city and commutes to work every day. The most negative aspects of Russia, in his opinion, are corruption among local officials (especially the traffic police) and the aggressive behavior that Russians can display in public, even with total strangers.

But locals should not feel offended — it’s not so bad to know that westerners feel the same as Russians when the latter curse their country’s poor roads, corruption and impoliteness.
———————————————————–
I have to say that it is very accurate in almost all aspects! I do have one strong disagreement:

“The most negative aspects of Russia, in his opinion, are corruption among local officials (especially the traffic police) and the aggressive behavior that Russians can display in public, even with total strangers.”

I agree with corrupt officials, but I have never had in two years living here, a single Russian act out of line or aggressive! (At least when I compare to my life in America.) The Russians are some of the most polite and quiet people that I have met & my wife and I travel all over the country and Moscow. (This is my perspective.)