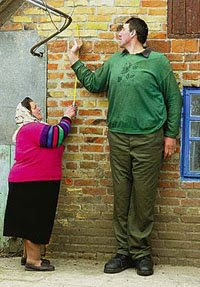 But Stadnik, who according to the Guinness World Records is the world`s tallest human, says his condition has also taught him that the world is filled with kindhearted strangers.

Since his recognition by Ukrainian record keepers four years ago, and by Guinness last year, people from all over Ukraine and the world have shipped him outsized clothing, provided his home with running water and recently presented him with a giant bicycle.

“Thanks to good people I have shoes and clothes,” said the 37-year-old former veterinarian, who still lives with his 66-year-old mother.

In 2006, Stadnik was officially measured at 2.57 meters tall (8 feet 5 inches), surpassing a Chinese man to claim the title of the world`s tallest person.

His growth spurt began at age 14 after a brain operation that apparently stimulated the overproduction of growth hormone. Doctors say he has been growing ever since.

While he may appear intimidating due to his size, Stadnik charms visitors with a broad grin and childlike laugh. He seems at times like a lonely boy trapped in a giant`s body, even keeping stuffed toys on his pillow.

Stadnik`s stature has earned him worldwide attention, but it has mostly a burden to him. He has to battle to lead anything close to a normal life.

All the doorways in his one-story brick house are too short for him to pass through without stooping. His 200 kilograms (440 pounds) cause constant knee pain and often force him to move on crutches.

Stadnik loves animals, but he had to quit as a veterinarian at a cattle farm in a nearby village, after suffering frostbite when he walked work in his socks in winter. He could not afford specially made shoes for his 43-centimeter (17-inch) feet.

But his recent fame has brought him friends from all over the world and taught him not to despair.

A German man who said he was his distant relative invited Stadnik for a visit several years ago. On the trip, Stadnik got to sample frog legs in an elegant restaurant and saw a roller coaster in an amusement park — both for the first time.

Shortly after that, Stadnik came home one day and saw a brand-new computer connected to the Web sitting on his desk — a gift from a local Internet provider. Company workers “sneaked into the house like little spies” to install the equipment, Stadnik joked.

Since then he has made numerous online friends, including several in the United States, Australia and Russia. Stadnik hopes to learn English so he can communicate better with his Anglophone contacts; currently, he relies on computer translations, which he says are often inadequate.

On Sunday, a local organization for the disabled gave Stadnik a giant bike so he can pedal to the grocery store, which is in a nearby village. The group also presented Stadnik with a fitness machine.

“I have always dreamt that my life and the life of my loved ones … would become more comfortable,” Stadnik said. “My dream is coming true.”

His neighbors joke that they may also benefit from Stadnik`s success. “Of course we are proud of him — we may have gas here soon thanks to him,” said Nila Kravchuk, 75.

Since he quit his job, Stadnik has concentrated on managing the family garden and taking care of his three cows, one horse and assorted pigs and chickens. He lives with his mother Halyna, 66, and his sister Larysa, 42.

Stadnik says his dream now is finding a soul mate, just like the former titleholder, China`s Bao Xishun, who was married last year.

“I think the future holds that for me,” he said.