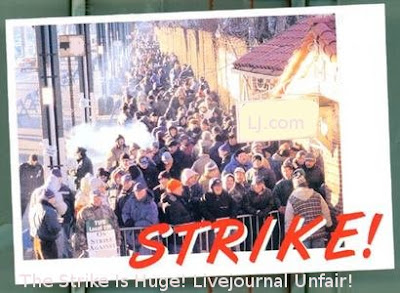 Bloggers on strike over lack of free service Thousands of users of the Livejournal.com blogging

web-service are on strike on Friday protesting against the policies of its owners, the Russian company Sup Fabrik.

They have pledged not to create any content and refrain from taking part in any discussions on the day of the strike in protest against the cancellation of so-called basic accounts, which are free of charge and without any advertising.

The online protest was initiated by an American user from St Louis, who claimed that basic users create value for the website by producing content.

The system is very popular among Russian bloggers, many of which said they would join in the strike.

“The existence of basic accounts, which are actually a non-profit thing – slightly contradicts the very idea of this being a commercial venue. We are not a Wikipedia, we are not fund-raising. We are expecting ourselves to live through advertising. To make things clear – we are not canceling any basic accounts that have been created before the announcement. We’re just not offering new ones,” he said