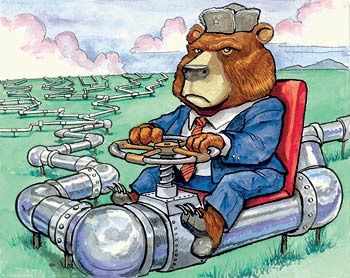 Russia’s output rebounded during the early 2000s, but the effects of high government taxation and a mature field base threaten an overall decline in production.

Russia’s production growth in the upcoming decade will depend on the availability of viable export routes for the country’s crude oil. Transneft currently has a monopoly over Russia’s pipeline network.

Russia has the largest natural gas reserves in the world, but the industry will face investment challenges in bringing new, more challenging fields online. In the meantime, production from Gazprom’s four largest fields are in decline.

Russia has the second-largest amount of recoverable coal reserves in the world.

I found this interesting. Maybe it will show you a little bit more about Russia.

Put out by the Energy Information Administration of the USA!