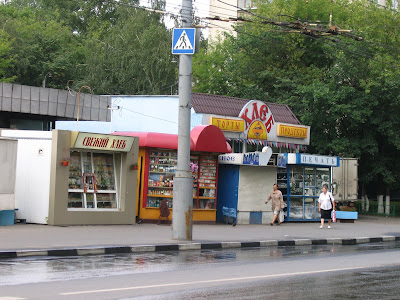 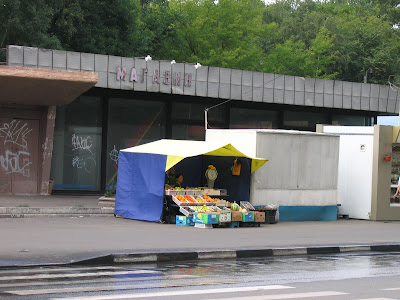 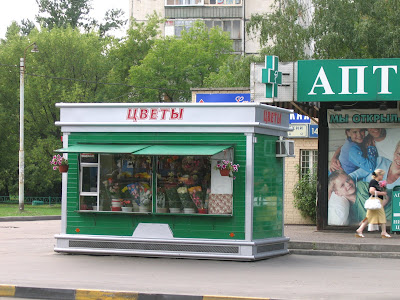 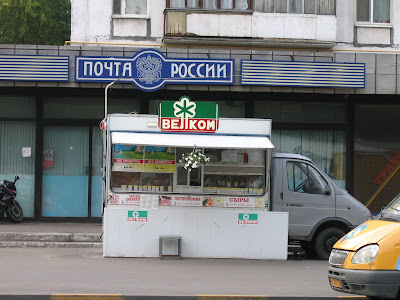 I was walking today and thought Americans might want to see what is on every street corner, at every bus stop and even stuck in the base of the towers of Flats.

The famous Kiosk, The wonder of the Russian Empire.

These little buildings sell everything from flowers to beer. Many of them are open 24 hours.

People who drink and smoke in America, will be jealous. The price for a pack of cigarettes is as low as 7 Rubles for generics to 20 Rubles for Marlboro, name brand. (this is about 25 cents a pack to 90 cents a pack)

The beer can be bought for anywhere from 8 Rubles to 100 Rubles. (American Beer some of the most expensive)

So, for $1 dollar in America (25 Rubles) you can get 2 big beers and a pack of cigarettes.

Now, I know a whole bunch of Rednecks in America, who would be in hog heaven with those prices.

comments welcome as always.
Kiosk:A kiosk is a booth with an open window on one side. Some vendors operate from kiosks, selling small, inexpensive consumables such as newspapers, magazines, lighters, street maps, cigarettes, and confections.