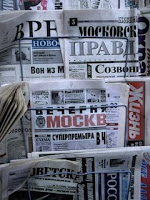 India to assemble Russian “flying tanks”:
In July India is to begin assembly of Russia’s main battle tank, the T-90. Up to now the country has bought only fully assembled tanks, but now it will build them with parts supplied by Russia.

Did nano-thermite take down the WTC?:
Could the most audacious terrorist attack in history be a “sophisticated masterpiece of demolition”?

G8 leaders support Russia-U.S. agreement on arms reduction:
Participants in the G8 summit in Italy have unanimously backed recent Russian and U.S. agreements to conclude a new strategic arms reduction deal by the end of the year, a Russian deputy foreign minister said on Thursday.

PACE move to deny Russia vote causes surprise in Moscow:
Moscow is confused over an initiative by some PACE members to try and deny Russia the right to vote during assembly sessions, a spokesman for the Russian Foreign Ministry said on Thursday.

Moscow wants OSCE to look into Russian-language issue in Ukraine:
Moscow hopes that the OSCE’s High Commissioner on National Minorities Knut Vollebaek will look into issues relating to the use of the Russian language in Ukraine, a Russian foreign ministry spokesman said on Thursday.