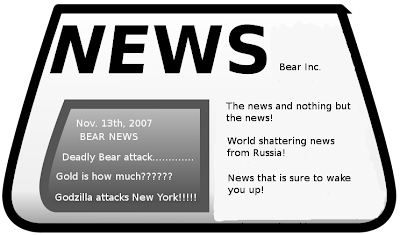 Dollar rising vs. ruble for 2 days:
RBC, 13.11.2007, Moscow 11:51:35.After an hour and a half of today’s special dollar trading session for tomorrow deals, the weighted average exchange rate stood at 24.53 RUR/USD. The official dollar rate for November 14 may therefore be revised RUR0.04 higher. Combined with a RUR0.04 loss on Monday, the ruble has dropped a total of RUR0.08, or 0.3 percent, against the dollar in two days. The current developments on MICEX may be attributed to the dollar’s advance against the euro on international exchanges. The latter is now trading at nearly USD1.4620, down from almost USD1.4650 at the same time at the previous session. Consequently, the euro has edged down around 0.2 percent against the US currency on the global market since then.

Two thirds of Russians likely to vote in State Duma elections:
RBC, 12.11.2007, Moscow 17:42:14.About 75 percent of Russians are planning to participate in the upcoming parliamentary elections, a poll by the Russian Public Opinion Research Center showed. Among those, 35 percent said they were definitely going, and 40 percent said they would most likely vote. As a result, the number of Russians willing to vote in the election has gone up from the previous showing of 68 percent about a month and a half ago.

The share of potential voters increases proportionally to the voter’s age: 30-32 percent of respondents are under 44 years old, 35 percent are between ages 45 and 59, while 47 percent are retired people.

The poll was held among 1,600 people in 153 locations of Russia’s 46 regions. The statistical error does not exceed 3.4 percent.

Russia to invest in oil and gas industry:
RBC, 12.11.2007, Moscow 12:15:32.Russia needs to invest $3 trillion in the next 10 years in the development of the country’s oil and gas industry, Viktor Ivanov, Head of the Russian Chemical Union, said during a conference in Moscow today. He noted that the amount would allow Russia’s oil and gas industry to reach the level of European countries. Ivanov added that the country needed to introduce new technologies that would allow companies to boost the share of refined oil products in the total amount of refined oil at least by 10 percent. He also said that it was more profitable for Russian companies to export oil rather than export refined oil products. Therefore, Ivanov reiterated Russian companies’ need to invest in their own development, while the government needed to create favorable market conditions for such companies. He pointed out that cutting taxes for oil companies would be a reasonable measure.