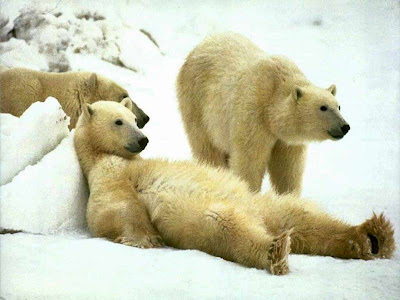 So when I see an article on the decline of Bears (all except, Black Bears in America). I get Sad! 🙁

Habitat loss and commercial hunting have been blamed for a decline in the number of sun bears – the world’s smallest species of bear.

An assessment by World Conservation Union (IUCN) has re-classified the animal as “vulnerable”.

Experts estimate that sun bears, found in south-east Asia, have declined by at least 30% in the past 30 years.

The IUCN’s bear expert groups warn that six out of the world’s eight bear species are threatened with extinction.

“Although we still have a lot to learn about the biology and ecology of this species (Helarctos malayanus) , we are quite certain it is in trouble,” said Rob Steinmetz, a member of the IUCN bear specialist group.

“We estimate that sun bears have declined by at least 30% over the past 30 years and continue to decline at this rate.”

Mr Steinmetz said deforestation had reduced the size and quality of the bears’ habitat.

“Where habitat is now protected, commercial poaching remains a significant threat,” he added.

“We are working with governments, protected area managers, conservation groups and local people to prevent extinctions of the many small, isolated sun bear populations.”

Until this latest assessment, the bears had been classified as “data deficient” because not enough was know about the state of the species.

One of the iconic species for conservationists, the giant panda, remains listed as “endangered”, despite recent efforts in China to release captive-bred pandas into the wild.

“Even though some people have claimed that panda populations are on the rise, we still consider them endangered because too much uncertainty exists to justify chnaging their status,” explained Dave Garshelis, co-chairman of the IUCN bear specialist group.

Although the giant panda (Ailuropoda melanoleuca) remains the world’s most threatened bear species, there are reasons to be optimistic about its long-term survival.

China has established nearly 60 panda reserves, a logging ban and begun a programme of reforestation.

Out of the eight species featured on the IUCN Red List, only the American black bear is considered secure throughout its range, which includes Canada, the US and Mexico.

With an estimated population of 900,000, there are more than twice the number of American black bears than all the other species put together.

“An enormous amount of effort and funding for conservation and management continue to be directed at bears in North America,” said Bruce McLellan, Mr Garshelis’ fellow co-chairman of the group.

“It is unfortunate that so little is directed at bears in Asia and South America where the need is extreme.”

The assessment of the seven terrestrial bear species and polar bear (technically classified as a marine mammal) was published on Sunday following a meeting in Mexico.

The findings will be used to update the bears’ entries in the 2007 edition Red List of Threatened Species, which is considered to be the most authoritative audit of more than 41,000 species.

Polar Bears are having a rough time surviving North of Russia. Humans keep taking their space and the ice is retreating.

Just thoughts for a Monday!