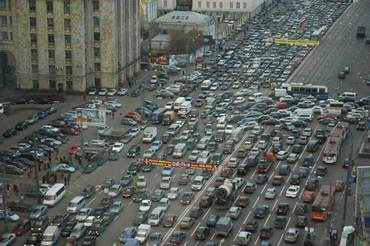 Hello,
My wife and I were driving the streets of Moscow on Sunday and we could not believe the traffic congestion. When we go out for a nice little ride through town! (take that sarcastically) We usually see around 3 – 4 bad wrecks. I learned in America, to drive defensively & I use every trick that I learned to stay out of accidents here in Moscow.

The change — largely involving streets in a west-central area stretching between Pushkin Square, Novy Arbat and the Garden Ring Road — came months after 49 two-lane streets in east-central Moscow were turned into one-way streets.

The latest move is expected to ease congestion in the city center by 10 percent to 15 percent, City Hall experts said.

Traffic jams are an enormous problem in Moscow, costing the economy billions of dollars in lost productivity and commerce every year. The average car travels at just over 16 kilometers per hour inside the Garden Ring. Citywide, the average speed is close to 25 kilometers per hour, according to city statistics.

The big problem with the roads is that they were built for public transport and very few cars.

I think that the statistics are wrong… Moscow has three million cars registered. It Feels Like two million of them are on the road, when we are out driving. 🙂