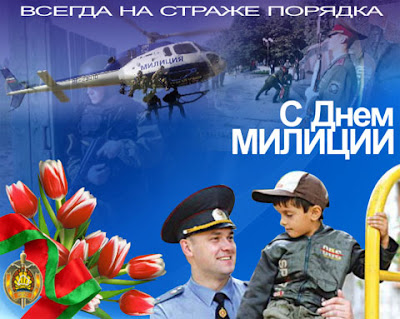 Today I want to congratulate all people who serves in Militsiya. (Police in America) Yesterday (Saturday) was the day to pay tribute to our Militsiya!

Recently (due to our car being broke into) I spent about 1+ hours in local Militsiya station and watched how hard they worked. They really were busy, Dispatcher called patrols cars every few seconds and gave the officers new orders. To go to fights, to check a situation somewhere and to a dispute somewhere, were just some of the few orders given.

I was so much impressed, his job was so intensive – I think even air traffic controllers don’t work that intensively. He just was getting more and more calls from Command Center. I heard: “Someone told that young people are too loud in the yard and he sent a patrol car to check, (then) someone complained on next door neighbors who was quarreled and fought,(then) someone call and told that he had smelled propane in his flat, yes Gas Service already had visited him and found nothing, OK – told the dispatcher – then cops will find ;).”

I’ve heard a cop talk to a man whom they kept in the camera room- that was nice kind talk even with some humor. So: I was impressed!

Before this day like many Russians, I did not think too good about Militsiya (never had deal with them- just it was like, Russian mentality).

Now when I’ve seen their real job I respect them very much! I’ve met just very kind and intelligent people at the Militsiya Station.

And one more thing what I would like to share with you: If you are in trouble call #02. If you see something what should not be call #02. (Russia of course)

Best wishes for all who serves in Militsiya!
They work hard in any weather any time!
They work for us!

PS That is the other emergency phone numbers in Russia:
01 – Fire emergency
02 – Militsiya
03 – Medical emergency
04 – Gas emergency
PPS More about Militsiya and why in Russia it’s called Militsiya (not Police like in many others countries) read here:
http://en.wikipedia.org/wiki/Militsiya