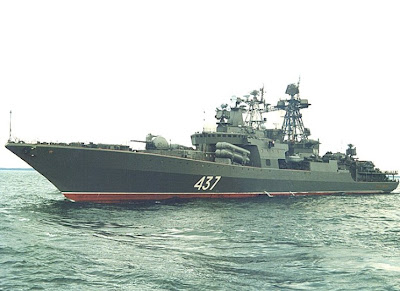 These last few days while drinking my cup of coffee I had to stop and think about our friends (Roberto and Lydia) in Panama. (I read their blog all the time, The Silver People Chronicle). The issue is in my mind because their blog is about the Panama canal and the Russians have a Warship going through the canal for the first time since 1944!

A Russian warship is passing through the Panama Canal in Central America for the first time since 1944. The Admiral Chabanenko is on its way back to Russia after participating in military exercises with Venezuela’s Navy in the Caribbean.

The ship will stay in Panama for five days to take onboard supplies before heading to the Pacific Ocean.

It marks a return to the region of Russian naval vessels.

In 1944 four Soviet submarines passed through the canal. (Link)

This video is about the historic situation and Russia feels pretty good about going where the past forbid….

So after checking out the Russian Warship video go take a peek at Roberto and Lydias blog. It is a good read. (Link)

Update to the article:

Lydia from The Silver People Chronicle passed on in a comment:

Rev. Marvia Lawes who lives and works in Colon did, however, get a “choice spot” on Lake Gatun and she has a rather fascinating account of her impression when she saw it. You can read it at her blog Marvia’s Panama Journal.

You saw a real Russian warship? Yup. And not on TV either. I already hear the disbelief in the voice of my friends when I recount for them my latest adventure in Panama.

I learnt from my sources that the Russian destroyer was scheduled to arrive in Colon Panama to transit Gatun Locks at around 17:40 pm on Friday. So my next move was to find someone to accompany me to the choice spot I got in order to take some photos to share with you. Well let me just say, adventures never quite go as planned, do they?