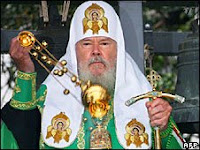 The head of the Russian Orthodox Church, Patriarch Aleksy II, has died. He passed away on Friday morning at his home near Moscow. The Church leader, 79, had been ill in recent years and had undergone several operations. His health reportedly deteriorated after a visit to Kiev in July. In September he underwent a heart operation in a German hospital. A source in the Church said that the Patriarch died of heart failure.

But this didn’t stop him from working. The day before his death Aleksy II held a divine service in the Cathedral of Assumption of the Moscow Kremlin to celebrate the beginning of the Christmas fast. (Link)