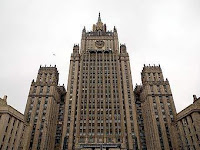 Officially announced in Russia today that adoptions of Russian children by U.S. citizens have been suspended for an indefinite period of time. This is according to Foreign Ministry spokesman Andrei Nesterenko, the resumption of adoptions will be possible only after a series of negotiations and signing by both parties a bilateral agreement that addresses the situation.

Russia has requested this agreement for years and this last incident with Artem Saveliev being sent back to Russia improperly was the straw that broke the camels back.

According to statistics from the Ministry of Education (data from 2007), the total number of adoptions of Russian children by foreign citizens, almost half are by the USA. The second and third largest number of adopted children is Spain and Italy in that order.

It was reported earlier that the foster mother Artem Saveliev abandoned the child because of the peculiarities of his mental state, as she did not warn the Russian authorities of his return. In connection with the incident Ministry of Education suspended the activities of the agency that organized the adoption. Now the suspension has been extended to the whole system interconnected with America…